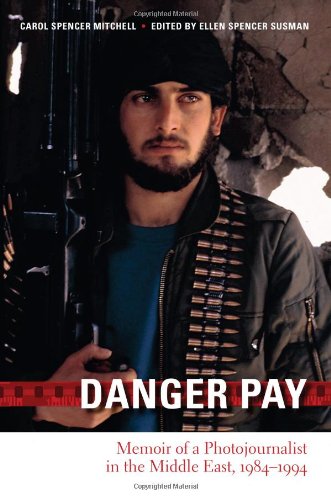 Danger Pay: Memoir of a Photojournalist in the Middle East, 1984-1994 (Focus on American History Series)
by Ellen Spencer Susman
Publisher's Description
'You're going where?' Carol Spencer Mitchell's father demanded as she set off in 1984 to cover the Middle East as a photojournalist for Newsweek and other publications. In this intensely thoughtful memoir, Spencer Mitchell probes the motivations that impelled her, a single, Jewish woman, to document the turmoil roiling the Arab world in the 1980s and 1990s, as well as how her experiences as a photojournalist 'compelled (me) to set aside (my) cameras and reexamine the way images are created, scenes are framed, and how 'real life' is packaged for specific news stories.'

In Danger Pay, Spencer Mitchell takes us on a harrowing journey to PLO military training camps for Palestinian children and to refugee camps in the Gaza Strip before, during, and after the first intifada. Through her eyes, we experience the media frenzy surrounding the 1985 hijackings of TWA Flight #847 and the Italian cruise liner Achille Lauro. We meet Middle Eastern leaders, in particular Yasser Arafat and King Hussein of Jordan, with whom Spencer Mitchell developed close working relationships. And we witness Spencer Mitchell's growing conviction that the Western media's portrayal of conflicts in the Middle East actually helps to fuel those conflicts—a conviction that eventually, as she says, 'shattered my career.'

Although the events that Spencer Mitchell records took place a generation ago, their repercussions reverberate in the conflicts going on in the Middle East today. Likewise, her concern about 'the triumph of image over reality' takes on greater urgency as our knowledge of the world becomes ever more filtered by virtual media.
ISBN: 0292718829
Publisher: University of Texas Press
Hardcover : 215 pages
Language: English
Dimensions: 6.2 x 9.1 x 0.8 inches