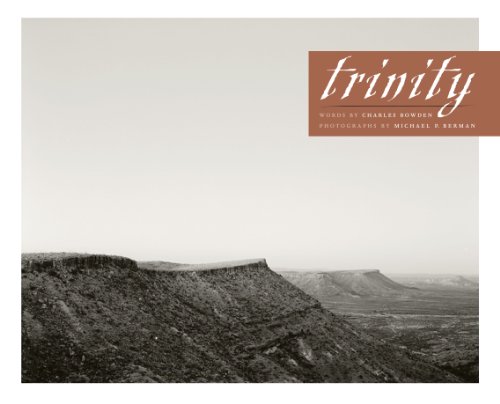 Trinity (The Bill and Alice Wright Photography Series)
by Michael P. Berman
Publisher's Description
The Southwestern desert—that tumultuous 'zone claimed by two nations, and controlled by no one'—is Charles Bowden's home and enduring passion. In acclaimed books ranging from A Shadow in the City: Confessions of an Undercover Drug Warrior and Down by the River: Drugs, Money, Murder, and Family to Inferno and Exodus/Éxodo, Bowden has written eloquently about issues that plague the border region—the smuggling of drugs and people and the violence that accompanies it, the rape of the environment and the greed that drives it. Completing a trilogy that includes Inferno and Exodus/Éxodo, Bowden looks back in Trinity across centuries of human history in the border region to offer his most encompassing and damning indictment of 'the murder of the earth all around me.'

Sparing no one, Bowden recounts how everyone who has laid claim to the Southwestern desert—Native Americans, Spain, Mexico, and the United States—has attempted to control and domesticate this ecologically fragile region, often with devastating consequences. He reserves special scorn for the U.S. government, whose attempts at control have provoked consequences ranging from the massive land grab of the Mexican War in the nineteenth century, to the nuclear fallout of the first atomic bomb test in the twentieth century, to the police state that is currently growing up around attempts to seal the border and fight terrorism. Providing a stunning visual counterpoint to Bowden's words, Michael Berman's photographs of the desert reveal both its harsh beauty and the scars it bears after centuries of human abuse.

Bowden's clearest warning yet about the perils facing the desert he calls home, Trinity confirms that, in his words, 'the (border) zone is a laboratory where the delusions of life—economic, religious, military, foreign policy, biological, and agricultural—can be tested. This time the edge is the center, this time the edge is the face of the future.'