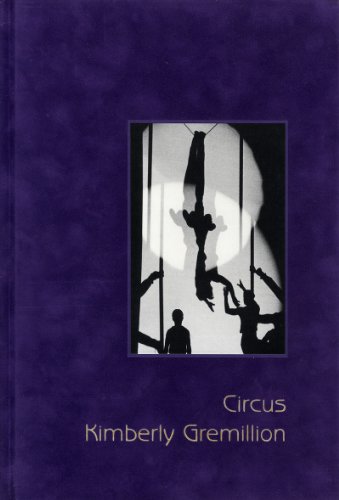 Circus
by Kimberly Gremillion
Publisher's Description
Kimberly Gremillion was born in Chicago and resides in Houston. In the spring of 1999, a series of her photographs was featured in Aperture magazine, Explorations: Nine Portfolios. In October 2003, Black & White Magazine featured selections from three of her portfolios, which included the cover. From September 2001 to August 2002 her circus work toured to several museums, including The Ringling Museum of Art, with the American Federation of Arts, New York. The photographs are featured in the accompanying book, Images From The World Between. The Barnum Museum in Bridgeport, Connecticut, exhibited a solo show this past summer entitled Double Vision: The Circus Series. Gremillion's Circus book tour began April 2003 at Stephen Cohen Gallery in Los Angeles, continuing on to Gerald Peters Gallery in Santa Fe and will travel to museums and galleries throughout the country through 2004. Gremillion is also represented in sixteen museum collections including The Art Institute of Chicago, The Bibliotheque Nationale, Paris, The Cleveland Museum of Art, The Philadelphia Museum of Art, The Museum of Fine Arts, Houston, and The High Museum of Art, Atlanta. 'Kimberly Gremillion reveals a heretofore unseen circus. The strange world she creates is one where positive and negative space seem reversed, where a horse is its mane, a woman her muscles, a tiger its stripes.' The Editors Aperture Magazine “Gremillion forces us to confront the reality that the world cannot be contained or explained by surfaces; she leads us unerringly across thresholds into another and richer world. Her subtle images, beautifully crafted and vibrant with imagination, do indeed generate tension, disquiet, and undoubted pleasure. Her explorations of the 'optical unconscious' bespeak a reality that never fails to intoxicate.” Richard Newby Black & White Magazine, Los Angeles “Kimberly expresses the inexpressible in a split second. The feeling never leaves, the feeling that we know all, and yet nothing. These images are to be felt more than seen. We are shown a part of our soul, the place that haunts and terrorizes us. Through these images we are challenged to deal with our darker side.” Graham Nash Musician/Photographer Nash Editions, Los Angeles 'Kimberly Gremillion appreciates the spectral and the spectacle. Light and shadow, etched on paper, dance in a special dimension.' W. M. Hunt Dancing Bear Collection, New York 'The book is a treasure, the shadows, the illusions of human movement, asides to scale and vulnerability that action and space throw onto the human form... all are poignant and moving.' Elizabeth Streb Choreographer/Director of S.L.A.M., New York
ISBN: 0972984003
Publisher: Infinity Editions
Hardcover : 128 pages
Language: English