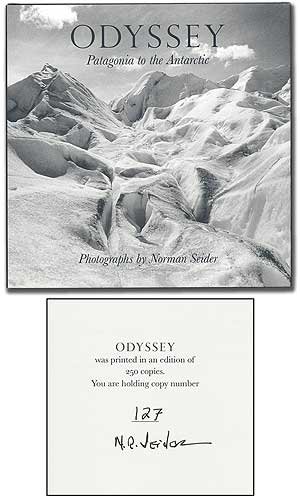 Odyssey: Patagonia to the Antarctic
by Norman SEIDER
Publisher's Description
For most of us, the word Patagonia brings up images of the company that sells technical apparel and gear for outdoor sports. It's easy to forget that the word 'extreme' in extreme sports is primarily a reference to the harsh climates in distant lands, and not to the antics of a handful of loony kids from California. Patagonia, the region in southern-most Argentina, is the type of place that has inspired adventurers since the age of Magellan. Seider has followed in their footsteps, camera in hand, giving us copious examples of both the beauty and harshness of this particular end-of-the-world. The barren hills of the Valley of the Condors, the snow-capped peaks surrounding Lago Pehoe, and Drygalski Fjord on the South Georgia Islands are all exquisitely rendered in black-and-white. 'Odyssey: Patagonia to the Antarctic' has recently been awarded 'Best Pictorial' Book' at the 2005 New England Book Show.

The edition is limited to 250 signed and numbered copies.
Publisher: The Perpetua Press
Hardcover
Buy on Amazon