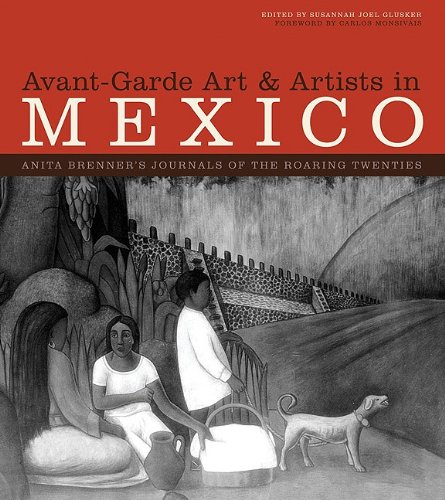 Avant-Garde Art and Artists in Mexico: Anita Brenner's Journals of the Roaring Twenties (The William and Bettye Nowlin Series in Art, History, and Culture of the Western Hemisphere)
by Susannah Joel Glusker
Publisher's Description
The Mexican Revolution—that violent, inchoate, never-quite-complete break with the past—opened a new era in Mexican art and letters now known as the 'Mexican Renaissance.' In Mexico City, a coterie of artists including Diego Rivera, José Clemente Orozco, and David Alfaro Siqueiros explored how art could forward revolutionary ideals—and, in the process, spent countless hours talking, gossiping, arguing, and partying. Into this milieu came Anita Brenner, in her early twenties already trying her hand as a journalist, art critic, and anthropologist. Her journals of the period 1925 to 1930 vividly transport us to this vital moment in Mexico, when building a 'new nation' was the goal.

Brenner became a member of Rivera's inner circle, and her journals provide fascinating portraits of its members, including Orozco, Siqueiros, Rufino Tamayo, and Jean Charlot, with whom she had an unusual loving relationship. She captures the major and minor players in the act of creating works for which they are now famous and records their comings and goings, alliances and feuds. Numerous images of their art brilliantly counterpoint her diary descriptions. Brenner also reveals her own maturation as a perceptive observer and writer who, at twenty-four, published her first book, Idols Behind Altars. Her initial plan for Idols included four hundred images taken by photographers Edward Weston and Tina Modotti. Many of these images, which were ultimately not included in Idols, are published here for the first time along with stunning portraits of Brenner herself. Setting the scene for the journal is well-known Mexican cultural critic Carlos Monsiváis, who offers an illuminating discussion of the Mexican Renaissance and the circle around Diego Rivera.
ISBN: 0292721846
Publisher: University of Texas Press
Hardcover : 901 pages
Language: English
Dimensions: 9.3 x 10.8 x 3.4 inches