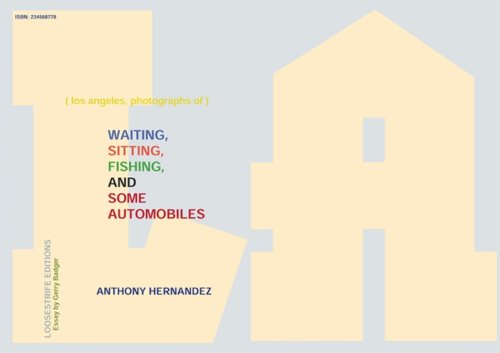 Waiting, Sitting, Fishing, and Some Automobiles: Los Angeles
by Gerry Badger
Publisher's Description
The photographs in this book are drawn from four bodies of work made with the 5' x 7' view camera between 1979 and 1983. Broadly speaking, it shows as Lewis Baltz said, people waiting and taking 'very, very humble recreations.' The four image groups making up the book are people waiting at bus stops, people lunching or sitting in public spaces, people at public fishing areas, and automobile repair shops. There are two primary elements in these photographs. They might be characterized as the visible and the invisible - or the depicted and the inferred. The depicted might be considered the lighter side to Hernandez's imagery - the city itself - the inferred the darker - its social realities. And in this his work mirrors Los Angeles, a city of light and shadow, a city that promotes vigorously an image of sun and Hollywood glamour, yet is arguably the most socially divided city in America, a sunny city with a dark heart at street level.
ISBN: 0975312022
Publisher: Loosestrife Editions
Hardcover Language: English