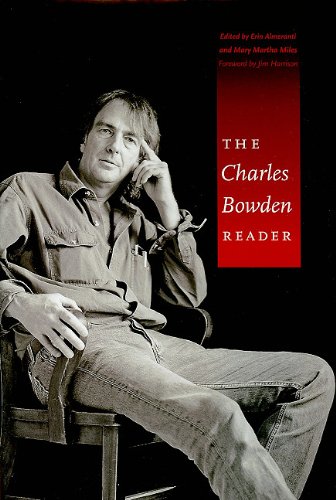 The Charles Bowden Reader
by Erin Almeranti
Publisher's Description
From his first book, Killing the Hidden Waters, to his most recent, Murder City: Cuidad Juárez and the Global Economy's New Killing Fields, Charles Bowden has been sounding an alarm about the rapacious appetites of human beings and the devastation we inflict on the natural world we arrogantly claim to possess. His own corner of the world, the desert borderlands between the United States and Mexico, is Bowden's prime focus, and through books, magazine articles, and newspaper journalism he has written eloquently about key issues roiling the border—drug-related violence that is shredding civil society, illegal immigration and its toll on human lives and the environment, destruction of fragile ecosystems as cities sprawl across the desert and suck up the limited supplies of water.

This anthology gathers the best and most representative writing from Charles Bowden's entire career. It includes excerpts from his major books—Killing the Hidden Waters, Blue Desert, Desierto: Memories of the Future, Blood Orchid, Blues for Cannibals, A Shadow in the City, Inferno, Exodus, and Some of the Dead Are Still Breathing—as well as articles that appeared in Esquire, Harper's, Mother Jones, and other publications. Imbued with Bowden's distinctive rhythm and lyrical prose, these pieces also document his journey of exploration—a journey guided, in large part, by the question posed in Some of the Dead Are Still Breathing: 'How do we live a moral life in a culture of death?' This is no metaphor; Bowden is referring to the people, history, animals, and ecosystems that are being extinguished in the onslaught of twenty-first-century culture.
ISBN: 0292723229
Publisher: University of Texas Press
Hardcover : 286 pages
Language: English
Dimensions: 6.5 x 9.8 x 1.2 inches