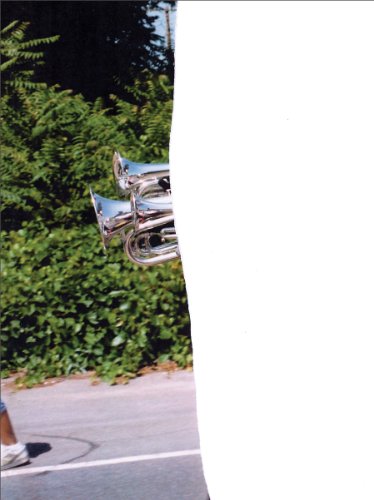 Christian Marclay: Fourth of July
by Jean-Pierre Criqui
Publisher's Description
Christian Marclay has consistently devised ingenious strategies for merging conceptual brilliance with destructive gesture, from 'Guitar Drag,' his film of a guitar dragged along a dirt road, to his 'Record Without a Cover' (issued to be damaged and then played). On 4 July 2005, Marclay photographed a marching band at an Independence Day parade in Hyde Park, New York. He then produced eight photographs as large prints, and proceeded to tear them up into more than 40 pieces. The result is this artist's book, which composes Marclay's chaotic photo-fragments-a foot suspended in midair, cymbals about to crash, a drumstick vibrating, trumpets detached from their players-into a visual and narrative equivalent of a sound-art work. In a further analogy to the artist's process, the book is printed in French folds that the reader must tear open to read.
ISBN: 0975392131
Publisher: PJC, New York
Paperback : 128 pages
Language: English
Dimensions: 7.1 x 9.4 x 0.4 inches