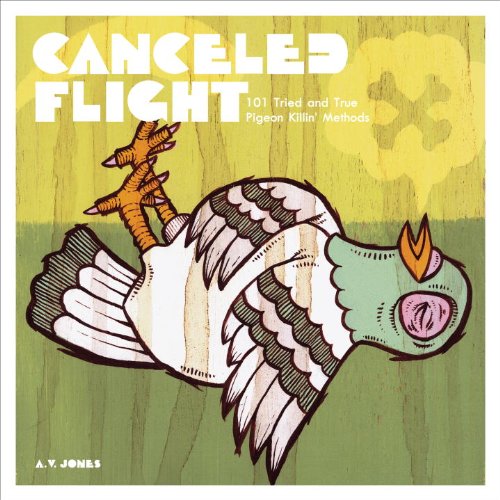 Canceled Flight: 101 Tried and True Pigeon Killin' Methods
by A.V. Jones
Publisher's Description
“It’s not against any religion to want to dispose of a pigeon.” —Tom Lehrer, from “Poisoning Pigeons in the Park”

No one is certain when pigeon-loathing began, but the anti-pigeon phenomenon has by now insinuated itself into every medium of popular culture. Whether in film, television, music, or advertising, pigeon eradication has become an accepted way to tug at a person’s funny bone. With Canceled Flight: 101 Tried and True Pigeon Killin’ Methods, Jasper Jones has created an Anarchist Cookbook of comic relief for the worldwide pigeon-hating population.

Conjured from Jones’ twisted brain, 101 surefire methods for speeding a pigeon’s journey to the grave are laid out for even the novice pigeon-despiser with lists of required materials and step-by-step guidelines. Every method has been brilliantly illustrated with the help of more than eighty-five of today’s hottest street-inspired painters, illustrators, designers, and photographers. Whether visualized in the pre- or post-death stages or at termination, each piece faithfully represents Jones’ methodology with incredible energy and originality—in “The Butcher,” a Dalek Space Monkey picks up a cleaver to “chop, chop, chop till he can’t chop no more,” and Cody Hudson’s “The Permanent Press” illustrates how two scorching hot irons can make a toasty pigeon sandwich in no time flat. An exhaustive compilation of execution, Canceled Flight is sure to provide the pigeon-killing technique perfect for you.
ISBN: 0976141604
Publisher: powerHouse Books
Paperback : 230 pages
Language: English
Dimensions: 7.9 x 8 x 0.8 inches