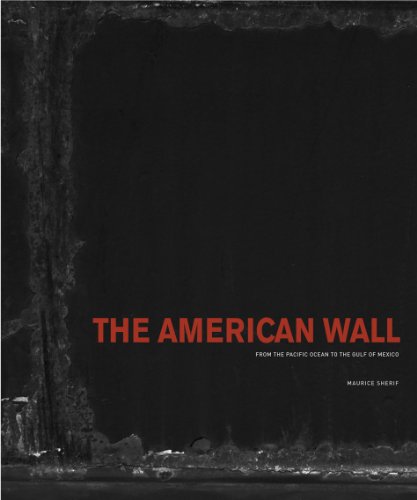 The American Wall: From the Pacific Ocean to the Gulf of Mexico (English and Spanish Edition)
by Maurice Sherif
Publisher's Description
Since mid-2006, Maurice Sherif has been photographing segments of the U.S.-Mexico border wall from the American side and questioning how the United States—which sees itself as a champion of law, democracy, and human rights—came to engage in such a project. In his words, 'the wall is an egregious violation of human rights and a political act with global ramifications for the United States. It is not only a physical symbol, but also a legal example of a national trend toward exceptionalism and exclusion.'

The American Wall is a photographic record of the wall segments at midday. The photographs, taken in the searing heat of the desert, are stark. They reveal the tactile harshness of the metal structure and the emptiness of its surroundings. The wall repels human activity, and its construction has made barren the surrounding landscape, once rich in biodiversity. In perhaps the final irony of this photographic documentation, the heat of the borderlands melted the film, framing many of the images in random tatters.

The lack of comprehensive planning for this wall has included a failure to consider the long-term environmental, social, and economic costs of altering the border with a physical barrier. According to Sherif and his fellow contributors, while some people to the north will entertain the illusion of separation from those feared as outsiders or enemies, the wall fails in its stated purpose of enhancing the safety and security of the people and place it is purported to protect. Those south of the border wall will continue to risk their lives in hopes of finding better opportunities on the other side.

Book One presents one hundred dramatic photographs of the wall, using the printing technique known as quadratone.