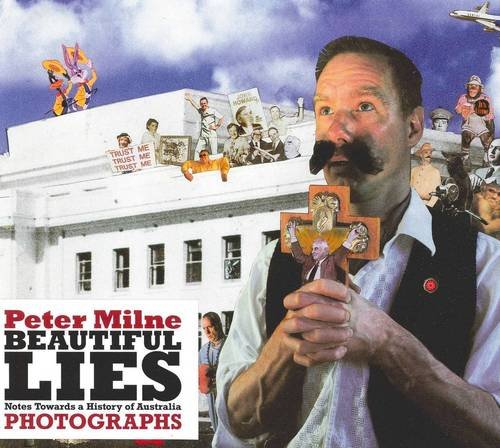 Peter Milne Beautiful Lies: Notes Towards a History of Australia
by Maurice Ortega
Publisher's Description
Dr. Peter Milne is one of Australia’s most significant journalistic and fine art photographers, with a practice spanning over 25 years. Born in Melbourne, Milne has been widely exhibited and published throughout Australia, Japan and the United Kingdom. Milne has previously published a photographic book titled Fish in a Barrel, his own personal documentation of Nick Cave and the Bad Seeds on tour. This well received publication was distributed in Australia, the United Kingdom and North America. Milne holds a PhD, along with a Masters in Visual Arts and a Bachelor of Visual Arts (Photography). He has lectured in many Australian universities including the University of Queensland, Queensland University of Technology, and Griffith University. Recent Australian solo exhibitions include ‘Brief Shining Moment’ (2007 - 2009), ‘Running Dogs’ (2009) and ‘Beautiful Lies’ (2009).

Recently, Milne’s latest bodies of work have steered away from documentation towards more subjective, personal expression. Milne’s affection for the narrative combines with his interest in Australian history and politics to create theatrical scenes through which the intricate stories of real Australian heroes are told. Milne’s background in journalistic photography gives him a strong respect for the ‘truth’ of reality, so it is with this frame of mind that Milne meticulously researches the lives of the personalities he represents. However, this historical ‘truth’ is sieved and reinterpreted through Milne’s vision and the constructed nature of the photograph. Truth is simultaneously represented and warped by theatrical dramatisation, which is essentially a lie.