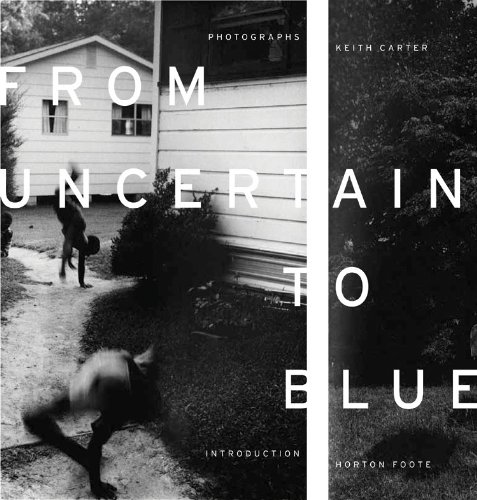 From Uncertain to Blue (Bill and Alice Wright Photography Series)
by Horton Foote
Publisher's Description
'In the beginning, there was no real plan, just a road trip that became a journey.' In the years 1986 and 1987, Keith Carter and his wife, Patricia, visited one hundred small Texas towns with intriguing names like Diddy Waw Diddy, Elysian Fields, and Poetry. He says, 'I tried to make my working method simple and practical: one town, one photograph. I would take several rolls of film but select only one image to represent that dot on my now-tattered map. The titles of the photographs are the actual names of the small towns. . . .' Carter created a body of work that evoked the essence of small-town life for many people, including renowned playwright and fellow Texan, Horton Foote. In 1988, Carter published his one town/one picture collection in From Uncertain to Blue, a landmark book that won acclaim both nationally and internationally for the artistry, timelessness, and universal appeal of its images—and established Carter as one of America's most promising fine art photographers.

Now a quarter century after the book's publication, From Uncertain to Blue has been completely re-envisioned and includes a new essay in which Carter describes how the search for photographic subjects in small towns gradually evolved into his first significant work as an artist. He also offers additional insight into his creative process by including some of his original contact sheets. And Patricia Carter gives her own perspective on their journey in her amplified notes about many of the places they visited as they discovered the world of possibilities from Uncertain to Blue.