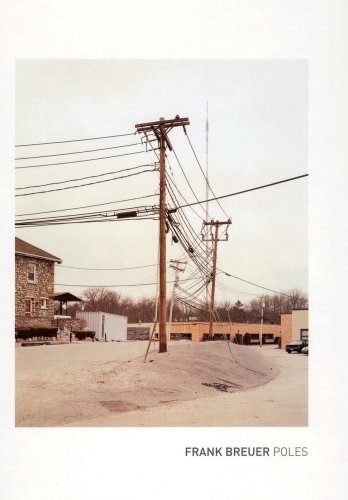 Frank Breuer: Poles
by Daniel Strong
Publisher's Description
As much influence as Bernd and Hilla Becher have had over the years, as founders of the Dusseldorf School and mentors to artists including Andreas Gursky, Candida Hofer, Thomas Ruff and Thomas Struth, among others, few of their progeny have worked in their most favorite form, the taxonomic study. Frank Breuer's portfolios of logos, warehouses, shipping containers and now, utility poles, are not just a tribute to his teachers. Critics have called them 'distinctive and deeply relevant.' The London Independent observed that 'Breuer's classically restrained photographs...give the corporate logos of our consumerist society a strange, sculptural dignity.' These utility poles, a series he began as an artist-in-residence at Harvard and continued in the midwest, represent his first American series.
ISBN: 0977677923
Publisher: Faulconer Gallery, Grinnell College
Hardcover : 68 pages
Language: English