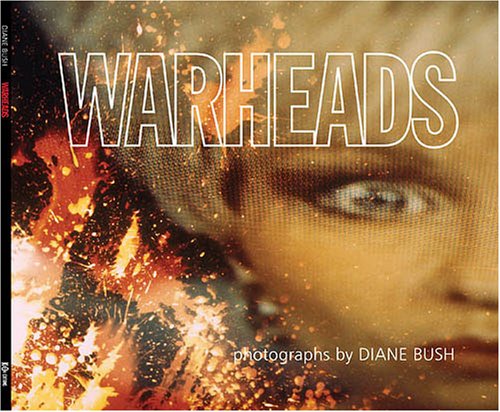 Warheads: photographs by Diane Bush
by Diane Bush
Publisher's Description
WARHEADS, published in conjunction with an exhibition at the Burchfield-Penny Arts Center on the campus of Buffalo State College in Buffalo, New York, features a selection of 26 color plates and features a foreword by D. Anthony Bannon, the Director of the George Eastman House, and an afterword by Jerry Schefcik, Director of the Donna Beam Art Gallery, in Las Vegas.

Diane Bush, a veteran “peacenik”, who fled to the UK with a draft dodger in the late 1960’s, turned her documentarian lens to the TV tube during the Gulf War for all 43 days of the war. Unlike other photographers who shot off the TV set, Diane used a macro lens at weird angles to achieve what many thought were computer- manipulated pictures of fat headed TV anchors (WARHEADS) and newscasters. The resulting commentary on media censorship was titled “Suppose They Gave a War and Nobody Had Cable?” (which became a one person show at the Nevada Institute of Contemporary Art, shown 10 years later) as part of a larger 20 year series called “500 Channels”.

As a reaction to the increased violence of the Iraqi war, Diane re-worked her original Gulf War prints by dragging them outside and throwing potassium ferry cyanide (bleach) on the prints and immediately hosing them down.

This act of “agit-pop” resulted in fiery red, orange, yellow, and white organic “explosions” on the prints...a visual commentary on how protected those who speak of the war, are in their safe, secure media “control” rooms. Perhaps if these celebrities were really being forced to face the violence that our soldiers face, would we feel differently?

Gratefully, the viewer can either take or leave the artists’ attempt at shocking us into any new perceptions about the current political landscape that the media is leaving out. There is no heavy-handed message, unless you want to dwell it. At the same time that Diane attempts to bring home her anti-war, freedom-of-speech message through the bizarre fantasy juxtaposition of CNN anchors facing fire and mayhem, the images are haunting, scary, funny, and beautiful.
ISBN: 0977895904
Publisher: KuDa Editions
Paperback : 60 pages
Language: English