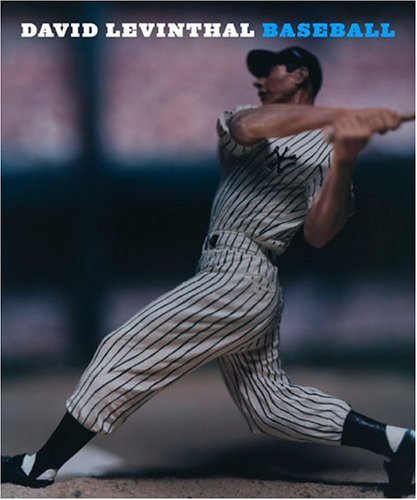 David Levinthal: Baseball
by David Levinthal
Publisher's Description
For more than three decades, artist David Levinthal has examined American popular culture and social mores as reflected through toys and miniatures. For Levinthal, the playful surface and shiny sheen of children’s objects shroud other meanings, which he cleverly uncovers in large format photographs that are equally stunning for both their beauty and irony. In series, like Wild West, American Beauties or Modern Romance, Levinthal pierces the mythology of quintessentially American subjects while also playing to our collective nostalgia. His is a vision that not only underscores our country’s uniqueness but also its desire for iconic representations and recognizable heroes.

Perhaps no series to date by Levinthal shows this more than his ongoing work about professional American baseball. Quite possibly the most accessible of all his series, Levinthal’s Baseball is remarkable for its straightforward celebration of America’s most beloved sport. With both antique and recently manufactured figurines, the artist has recreated some of the legendary moments that color baseball’s history—for example Don Larsen’s perfect game in 1956, Carlton Fisk waving fair his 12th-inning home run to give Boston game six of the 1975 World Series, and Mark McGuire’s record setting 70th home run in 1998. The breadth of stars portrayed includes such past and present players as Babe Ruth, Derek Jeter, Satchel Paige, Ozzie Smith, Reggie Jackson, Willie Mays, Roger Clemens, among many others.

Baseball affords a colorful view of the best and the boldest athletes to have ever played the sport. It is a book that will thrill enthusiasts of baseball and photography alike. The book promises to be among Levinthal’s very best in a career that is nothing short of stellar.
ISBN: 0977900800
Publisher: Empire
Hardcover : 144 pages
Language: English
Dimensions: 10.1 x 12.2 x 0.7 inches