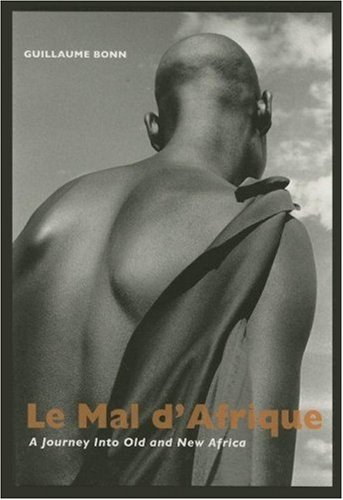 Le Mal D'afrique: A Journey into Old And New Africa
by Guillaume Bonn
Publisher's Description
“So many people have tried to define the feeling the French call mal d'Afrique which in fact is a disease. The English never had a definition for it, I guess, because they never liked to admit that they were being threatened in any way by this continent. Obviously, because they preferred the idea of ruling it rather than being ruled by it.”

In Le Mal d'Afrique, renowned photojournalist, Guillaume Bonn, treats viewers to an unprecedented and extraordinarily diverse glimpse into present day Africa, while also sharing the personal context of being born and raised there and how this history informs his remarkable photographs.

Bonn's pictures explore Africa's painful history and his family's role in it. He grapples as well with the many challenges Africa faces in the future, in holding onto its traditions, in maintaining its natural beauty and in grappling with urban sprawl. These threats to the Africa Guillaume Bonn has come to know so well are here captured and reproduced for the first time.

To illustrate a bit of his past, Bonn has also opened up his family photo album which illustrates four generations of family members who called Africa home. Here, we see Bonn's great grandfather in military uniform during an expedition to Niger and Sudan, or his grandfather hunting a giant crocodile in Madagascar or his father wearing a colonial era-pith helmet while being cradled by his nanny. The album photographs Bonn shares show us the complicated and troubled history of Africa’s colonial past-the trouble left in the colonialists’ wake-while also revealing the personal, human scale of passion for and interest in this unique and unmatched region of the world.
ISBN: 0977900835
Publisher: Empire
Hardcover : 149 pages
Language: English