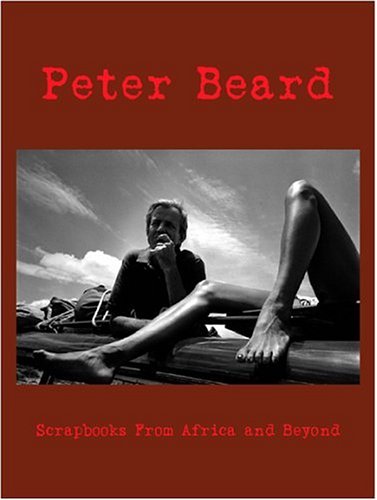 Peter Beard: Scrapbooks from Africa And Beyond
by Guillaume Bonn
Publisher's Description
Peter Beard: Scrapbooks From Africa and Beyond is a colorful and definitive portrait of a man of all seasons, a man in love with people and places, a passionate man, an obsessed man constantly passing from one dimension to another. The book and film follow the inner drama of one of the great creative spirits. Like the colorful marginalia of the notebooks he's kept since his youth, it is collage drawn from life itself. Scrapbooks From Africa and Beyond reveals a mixture of seriousness and wit, and rests upon Peter Beard's skills as a storyteller. A person cannot experience the intensity of life such as Beard has-suffer such scrapes and bruises associated with the adventurer's life-without being lively company.

A series of incisive and never before published interviews by British journalist Edward Behr form the backbone of Scrapbooks From Africa and Beyond that takes viewers to three continents. Beard lives in the present and here we are offered a rare experience to observe how he captures the essence of each moment. Marked by a sense of intimacy and sincerity, Scrapbooks From Africa and Beyond shows Beard at work shooting nudes and fashion, with his family and friends, the native Kenyans he lived near and works with or just one-on-one, in candid and revealing scenes that underscore his life's work.

In Scrapbooks From Africa and Beyond, Beard's adventures and the substance of his work are united as one. The iconic photographs of his legendary past are revisited and for the first time we read and hear the stories about the making of Beard's first book End of the Game, his appearance in the underground classic, 'Hallelujah the Hills,' his fortuitous meeting with British painter, Francis Bacon, and his youthful acquaintance with Karen Blixen. Beard's epic notebooks, bound with ink, blood, photographs and the detritus of life on the road are matched here by his recollections of the remnants of Kenya's colonial past.

Scrapbooks From Africa and Beyond establishes the context in which Peter Beard came to Kenya and made his home there. On Lake Rudolph, the world's largest desert lake, Beard tells us of the months he spent there studying crocodiles as a young man. At Hog Ranch, in the suburbs of Nairobi, viewers see how Beard lives with his pictures, paintings, friends and animals. In the United States, Beard walks the streets of Manhattan in a blazer, sari and sandals, hardly recognizing his city, telling us why he desired another place. On the beaches of Montauk, he reminiscences about the decadent 1970s, Warhol, the Factory and Pop Art. The photographs shown and described in Scrapbooks From Africa and Beyond record Beard's milieu, the eras he survived, as well as the bygone past which drew him to the 'dark continent' in the first place.