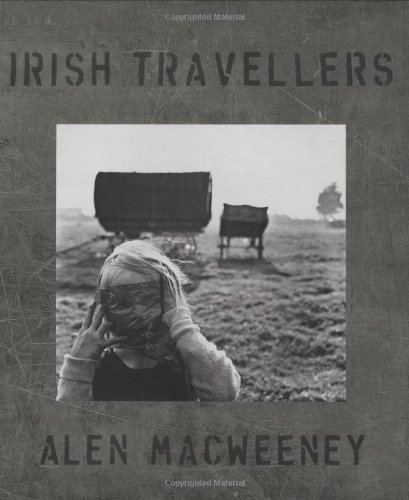 Irish Travellers, Tinkers No More
by Bairbre Ni Fhloinn
Publisher's Description
In 1965, Alen MacWeeney came upon an encampment of itinerants in a waste ground by the Cherry Orchard Fever Hospital outside Dublin. Then called tinkers and later formally styled Travellers by the Irish Government, they were living in beatup caravans, ramshackle sheds, and time-worn tents. MacWeeney was captivated by their independence, individuality, and en durance, despite their bleak circumstances.

Clearly impoverished, Travellers were alienated-partly by choice-from greater Irish society. They lived catch-as-catch-can. Traditionally, tinkers had been tinsmiths and pot menders; always, they had been horse traders, and they continued to keep some piebald horses. They worked now and again as turf-cutters or chimney sweeps. The women begged in the streets of Dublin and large towns; some told fortunes. They were not welcomed in the country towns of Ireland, where they set up their encampments in lay-bys and cul-de-sacs, littering the roadsides with their waste, hanging their washing on bushes. To Alen MacWeeney, they recalled the migrant farmers of the great American Depression-poor, white, and dispossessed-as the government attempted to get them off the roads of Ireland and gather them in settlements. Although they had been eligible for the dole since 1963, the tinkers-become-Travellers cherished their wayward, ancestral lifestyle.

Already noted in the United States as a photographer of great sensitivity, MacWeeney became accepted by the Travellers and began to photograph them. In a moving essay in the book, he writes: 'Theirs was a bigger way of life than mine, with its daily struggle for survival, compared to my struggle to find images symbolic and representative of that life.' Over five years, he spent countless evenings in the Travellers' caravans and by their campfires, drinking tea and listening to their tales, songs, and music - 'rarely shared or exposed to camera and tape recorder.' Includes CD.
ISBN: 0979013003
Publisher: New England College
Hardcover : 132 pages
Language: English