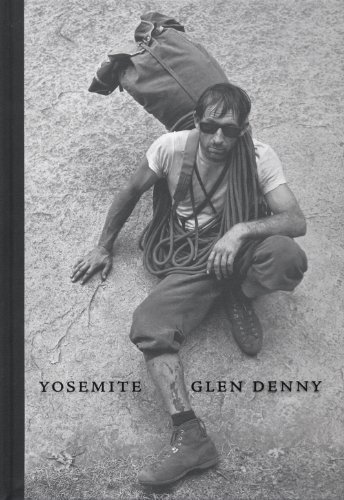 Glen Denny: Yosemite in the Sixties
by Yvon Choiunard
Publisher's Description
The sheer granite walls of Yosemite Valley have drawn a lot of visitors over the years. In the late 1950s and through the 60s, they galvanized a dedicated group of rock climbers, who saw their glacier-polished faces as the purest challenge. When those climbers first made their way up Half Dome and El Capitan, they ushered in a new era-over the course of the 60s, they developed techniques, tools and philosophies that would change the sport forever. In the 60s spirit of social exploration, a small group of committed climbers eventually dropped out of the mainstream of work and society to take up residence at Camp 4, perfecting their skills and developing a unique scene. This austere, boulder-strewn campground became the epicenter of the climbing world. In between spectacular feats carried out on the walls, it served both as a launching pad for further adventures and a refuge from them. Here, plans were made, teams were formed and life was lived. The significance of Camp 4 was recently recognized in its placement on the National Register of Historic Places. Photographer and filmmaker Glen Denny was among its denizens, and captured his fellow climbers' personalities and parties, aspirations and preparations, loves and dreams in absolutely stunning, and sometimes death-defying, black-and-white. This majestic visual record of Yosemite in the 60s includes a foreword by Yvon Chouinard, founder of Patagonia, an introduction by Rick Ridgeway, whom Rolling Stone has called 'the real Indiana Jones,' and a wealth of previously unpublished photographs.
ISBN: 0979065909
Publisher: T. Adler Books/Patagonia
Hardcover : 144 pages
Language: English
Dimensions: 9.1 x 12.9 x 0.8 inches