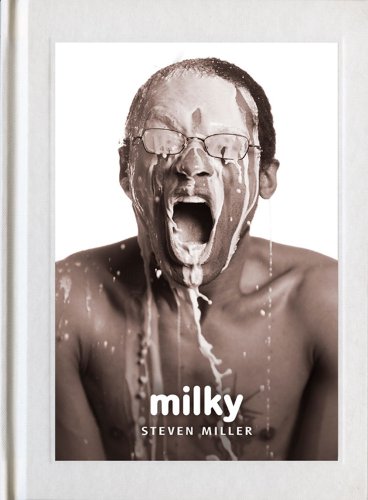 Milky
by Steven Miller
Publisher's Description
Steven Miller’s work connects the theatricality inherent in photography with staged environments and predicaments, highlighting the dialogue between his subjects and his created situations resulting in the unexpected outcomes that dialogue provokes. In his series, Milky, the camera captures the immediate emotional reactions of some 60 individuals in the instant they are doused with cold milk. Exploring the materiality of milk as a metaphor for the nature of sexuality, these portraits document that which is fluid, tangible, and ephemeral. “Depicting friends, lovers, and complete strangers coated in the fluid of another animal, these photographs are meant to suggest both the pleasures and risks associated with sexual exchange,” says Miller. By taking a familiar substance and perverting it, Miller’s portraits document some of the emotions that sexual desire conjures: bliss and amusement as well as danger and detachment.

Milky is part of the Signature Series, each of which are limited to 500 signed and numbered copies. Each contains one original tipped-in photograph.
ISBN: 0979337364
Publisher: Decode, Inc.
Hardcover : 24 pages
Language: English
Dimensions: 0 x 0 x 0 inches