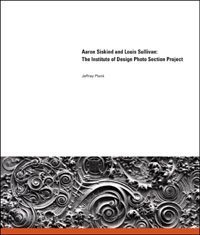 Aaron Siskind and Louis Sullivan: The Institute of Design Photo Section Project
by Jeffrey Plank
Publisher's Description
A fascinating book for followers of both architecture and photography: the first publication of a project that involved two giants of American arts, photographer Aaron Siskind and architect Louis Sullivan, called the father of modernism, and the creator of the skyscraper. In 1952, while Siskind was teaching at Chicago’s Institute of Design, he and his advanced photography students undertook a comprehensive photographic survey of Sullivan’s architecture, eventually shooting over 60 buildings. From hundreds of photographs, Siskind composed an exhibit of 126 photographs of 35 buildings by Sullivan, who died in 1924. Siskind’s exhibit was a documentation of Sullivan’s architecture unlike any other – and one that could never be repeated, because so many of Sullivan’s buildings were demolished shortly thereafter. More than 50 years later, the photographs are still fresh: Sullivan’s buildings are arrested in their decline, their darkened ornament luminous in Siskind’s incomparable compositions. In fine accompanying texts, this book also tells the story of the exhibit, relating the Sullivan project to Siskind’s documentary and abstract work and to earlier Sullivan building photographs. The use of architectural photographs was an essential part of early modern architectural exhibits and histories that sought to codify the International Style. Siskind’s innovative photographs and equally innovative exhibit installation challenged the opinions of Sullivan and modern architecture by architectural historians at the time. Includes 166 black and white reproductions.
ISBN: 0979550831
Publisher: William Stout Publishers
Hardcover : 272 pages
Language: English