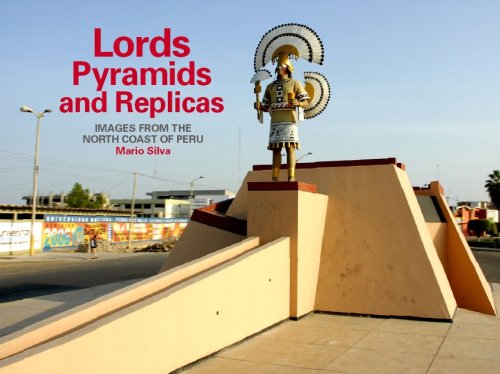 Lords, Pyramids and Replicas: Images from the North Coast of Peru by Mario Silva
by Roger Atwood (foreword)
Publisher's Description
In cities around the world, the iconography of ancient cultures can only be found in select places enshrined in designated historic areas, or kept under glass in museum exhibits. But on the north coast of Peru, following a dramatic 1987 skirmish between archaeologists, grave robbers, and the local police, the long-buried iconography of this remote area erupted into the public consciousness. In a new book, LORDS, PYRAMIDS AND REPLICAS: Images from the North Coast of Peru, photographer Mario Silva illustrates the ways in which the artwork and symbolism of Peru s ancient Moche culture have infiltrated every aspect of the area s quotidian life. From bus stations, roadside shrines, and souvenir shops, Silva vividly documents the vast influence of Moche iconography, showing unexpected parallels between architecture and advertising, valuable antiquities and cheap knick-knacks. A foreword by journalist Roger Atwood provides historical and cultural context for the images that follow, beginning with a montage that shows three huaqueros professional grave robbers at work, uncovering artifacts in the shadow of the vast Sipan monument. From this departure point, Silva follows the journey of the striking Moche symbolism discovered there as it floods into the mainstream world. A photograph of a huaquero holding a newly-uncovered mask gives way to one showing replicas of similar artifacts, stacked three deep in the window of a souvenir shop. Later, the striking silhouette and costume of a Sipan warrior is seen represented in multiple incarnations: a child s drawing, a faux-gold figurine, a logo used to sell gasoline, and finally, as a tattoo on the thigh of a reclining man. The settings depicted range from stark landscapes to colorful neighborhoods, and Silva s photographs evoke the atmosphere of northern Peru with intimacy and candor.

These vibrant images, uninterrupted by labels or explanatory text, are more than just a stunning survey of contemporary Peruvian aesthetics. Through their clever juxtaposition and repetition of visual elements, Silva s photographs raise important questions about the nature of symbolism, and how these icons can evolve from religious figures to staples of popular culture.
ISBN: 0979666600
Publisher: Mallqui Books
Paperback : 130 pages
Language: English