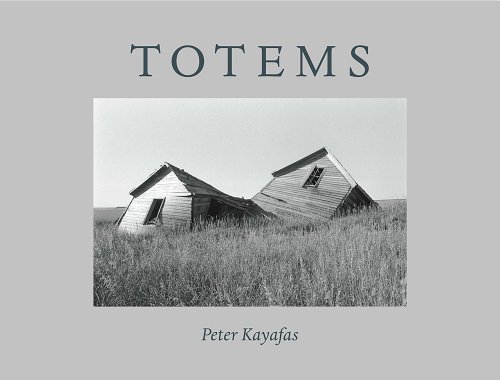 Totems
by Peter Kayafas
Publisher's Description
The Purple Martin Press is proud to announce the publication of the monograph Totems by American photographer Peter Kayafas, with an essay by renowned art critic, Jed Perl. This elegant volume explores the abandoned buildings of the west—churches, libraries, barns and houses—that were once part of vital communities of farmers and migrants, and are now abandoned and in various states of decay. Kayafas approaches the buildings as he might photograph people: the images are formal portraits that capture the dignity and resilience of simple but extraordinary structures that seem to call out for recognition. In his essay, Jed Perl writes, “Kayafas’s explorations of an endangered vernacular architecture are at once straightforward records and unabashedly poetic meditations.”

Selections of Totems have been exhibited to critical acclaim in solo exhibitions in New York and Boston in 2011 and 2012.

“Kayafas’s images have a timeless quality. They’re simple and spare, yet quietly overpowering with their evocations of a history on a scale beyond that of individual lives.” –Mark Feeney, The Boston Globe