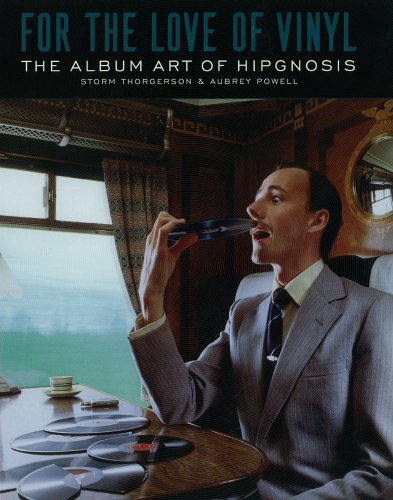 For the Love of Vinyl: The Album Art of Hipgnosis
by Storm Thorgerson
Publisher's Description
Hipgnosis was the biggest and best graphic design firm for the biggest and best bands of the 60s and 70s. Formed by Storm Thorgerson and Aubrey Powell in London in 1968 (with the addition of Throbbing Gristle’s Peter Christopherson in 1974), Hipgnosis specialized in creative photography for the music business, making classic album covers for bands and musicians like Pink Floyd, Led Zeppelin, Electric Light Orchestra, Genesis, 10cc, Yes, Peter Gabriel, The Gods, Black Sabbath, Rainbow, Paul McCartney, Syd Barrett, Scorpions and Styx, among others. Over the course of its 15 year existence, Hipgnosis produced timeless rock iconography—everybody knows at least one Hipgnosis cover, thanks to Pink Floyd’s Dark Side of the Moon. The firm’s inventive takes on the themes or titles of any given album opened up a new visual language in album cover art, one in which theatrical tableaux, trick photography and logo design played notable roles. For the Love of Vinyl is the first book to survey Storm and Powell’s output in detail, focusing on more than 60 package designs—from cover to label—described with entertaining detail by the team who created them. Also included are short essays by musicians (such as Pink Floyd’s Nick Mason and artists (British Pop artist Peter Blake) and fellow designers (Paula Scher) on their favorite Hipgnosis covers, as well as previously unseen photographs and ephemera. Complementing all this material is a lengthy critical-historical text examining Hipgnosis and its legacy. For the Love of Vinyl is the rock book of 2008.
ISBN: 0981562213
Publisher: PictureBox
Hardcover : 224 pages
Language: English
Dimensions: 9.4 x 12.4 x 0.9 inches