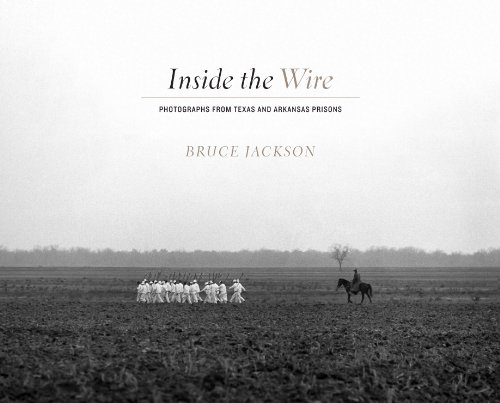 Inside the Wire: Photographs from Texas and Arkansas Prisons
by Bruce Jackson
Publisher's Description
As recently as the 1970s, many inmates in southern prisons lived and worked on prison farms that were not only modeled after the American slave plantation, but even occupied lands that literally were slave plantations before the Civil War, and on which working and living conditions had not changed much a century after the war. Bruce Jackson began visiting some of these prison farms in the 1960s to study black convict worksongs and folk culture. He took a camera along as means of visual note taking, but soon realized that he had an extraordinary opportunity to document a world whose harshness was so extreme that at least one prison had been declared unconstitutional. Allowed unsupervised access to prison farms in Texas and Arkansas, Jackson created an astonishing photographic record, most of which has never before been published in book form.

Inside the Wire presents a complete, irreplaceable portrait of the southern prison farm. With freedom to wander the fields and facilities and hang out with inmates for extended periods, Jackson captured everything from the hot, backbreaking work of hand-picking cotton, to the cacophony and lack of all privacy in the cell blocks, to the grim solitude of death row. He also includes some early twentieth-century prisoner identification shots, taken by anonymous convict photographers for the prison files, that survive as profoundly evocative human portraits. These images and Jackson’s photographs document, as no previous work has, the humanity of the people and the inhumanity of the institutions in which they labor and languish. As Jackson says, “sometimes kindness happens with prison, but prison itself is a cruel world outsiders can scarcely imagine. I hope nothing in this book suggests otherwise.”
ISBN: 029274496X
Publisher: University of Texas Press
Hardcover : 200 pages
Language: English
Dimensions: 12 x 9.8 x 1 inches