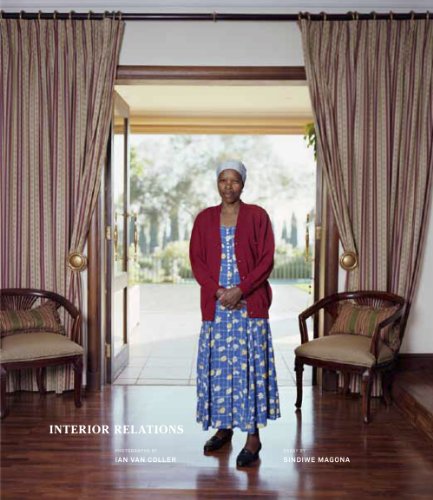 Interior Relations
by Richard Renaldi
Publisher's Description
While Ian van Coller was growing up in the 1970s, the black women working in his parents’ upper class home in a whites-only suburb of Johannesburg were valued as members of the family. Nannies and maids who helped raise the children and run the household, they were ever-present confidants and friends. And yet they were conspicuously absent from family vacations and photo albums.

Apartheid, though it has been officially consigned to history, continues to live on in nearly a million South African homes where blacks still serve the needs of the white minority. Ian van Coller’s first monograph, Interior Relations, deftly probes this enduring racial fault line with a simple yet elegant premise: he has asked black housekeepers, nannies and maids to wear their finest clothes, and to sit for formal portraits in the homes they care for.

Though the subjects’ white employers are never shown, evidence of their privilege crowds around the women, forever out of reach: every portrait a cameo of apartheid in redux.

For Sindiwe Magona, one of South Africa’s most celebrated black writers, working as a domestic in her youth provided a desperately needed but meager income that she was forced to supplement by selling sheep heads on the street. Serving white families represented a constriction of the soul that was broken only by the force of her will to become a writer.

Magona’s introduction channels the voices of van Coller’s subjects through her own years as a domestic worker. Ian van Coller’s delicate and reverential portraits, coupled with Sindiwe Magona’s searing essay, offer a starkly original view of the intersection of race and class in post-apartheid South Africa.