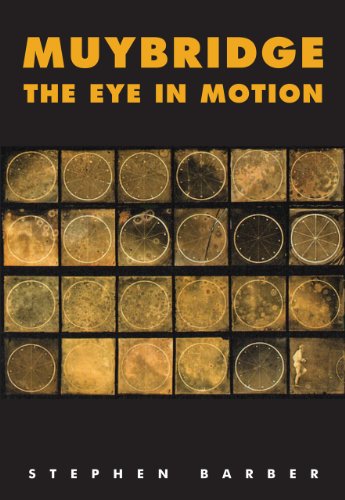 Muybridge: The Eye in Motion (Solar Books - Solar Film Directives)
by Stephen Barber
Publisher's Description
Much of contemporary visual culture can be traced directly to the work of Eadweard Muybridge, photographer and film pioneer. In Muybridge: The Eye In Motion, Stephen Barber analyses Muybridge’s prodigious output principally through the photographer’s own scrapbook, a multi-dimensional and unprecedented “memory-book” that was created in the final years of his life. Based on this extensive primary research into Muybridge’s personal archive, this innovative and ground-breaking book illuminates both the preoccupations behind his influence on twentieth-century artists like Francis Bacon, his role in the origins of cinema, and his early prefiguring of the digital world. The result is an authoritative and original look at the man, his body of work, and his influence.

Muybridge’s work was powered by an extreme obsessiveness and excess that enabled him to negate all preconceptions of art and to reconceptualize the dynamics of corporeal and urban forms. Above all, Muybridge envisioned the future of cinema by creating a moving-image projector—the zoopraxiscope—and by constructing the first identifiably cinematic space to project his compositions for an audience.

Intended for readers and students of film and art history, Muybridge: The Eye In Motion is the first-ever study focused directly on the relevance of Muybridge’s work for contemporary digital cultures. Complete with striking illustrations and outstanding reproductions of archival photographs, Barber’s book is the most comprehensive and fully-researched account of Muybridge’s contribution to the origins of film and the best new history of visual culture in years.
ISBN: 0983248052
Publisher: Solar Books
Hardcover : 200 pages
Language: English
Dimensions: 6.9 x 9.8 x 0.7 inches