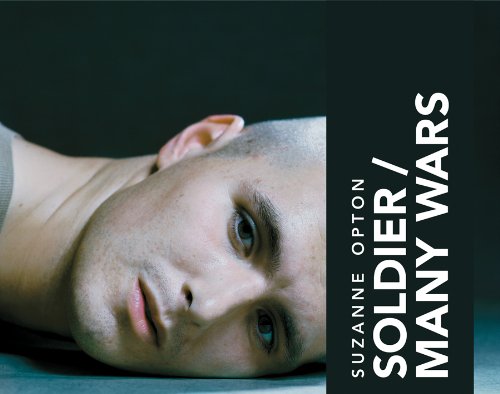 Suzanne Opton: Soldier, Many Wars
by Phillip Prodger
Publisher's Description
In the two series collected in this volume, Soldier/Many Wars, photographer Suzanne Opton (born 1954) photographs a range of American soldiers close up, laying their heads before the camera, and American veterans who are draped. The subjects of the Soldier series are all young, active-duty soldiers from the Iraq and Afghanistan wars, and the photographs were presented as billboards in nine American cities from 2008 through 2010. Reviewing them for The New York Times, photography critic Vince Aletti wrote: “The posture is vulnerable and startlingly intimate, as if these young men and women were facing someone in bed or on a stretcher... Opton catches soldiers both on guard and off, looking out and inward simultaneously, and we can only imagine what they're thinking, what they've done, and what they dread.” The project received extensive press coverage and even sparked a heated debate about America's image of the military. The Many Wars series presents portraits of veterans from American wars over the past 70 years. Through interviews by the photographer, we learn how the wars have affected their lives. Both bodies of work were selected by Martin Paar for the Brighton Photo Biennial in 2010.
ISBN: 0983394202
Publisher: Decode Books
Hardcover : 104 pages
Language: English
Dimensions: 9.4 x 11.8 x 0.7 inches