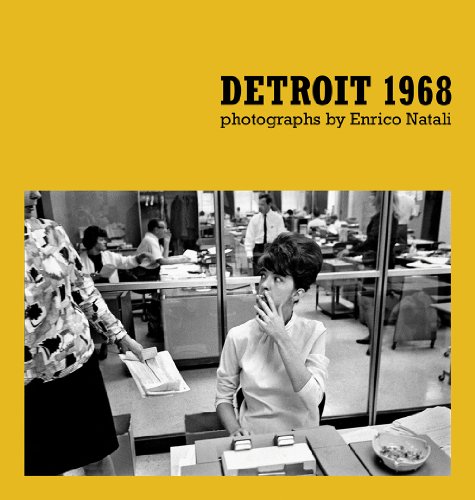 Enrico Natali: Detroit 1968
by Jane Brown
Publisher's Description
Detroit 1968 was first published in 1972 under the title New American People, and was the subject of Enrico Natali’s 1969 solo exhibition at the Art Institute of Chicago. In his introduction to the 1972 edition, Hugh Edwards, former Curator of Photography at the Art Institute of Chicago, wrote: “All the photographs in the present collection were taken in 1967–1970 in Detroit, which in no way restricts their presentation as a brief of how Americans look and live today. These scenes and incidents might have occurred anywhere in the United States in this time when regional characteristics are disappearing ... this is a view of a situation and condition, not a localization.” Forty years later, we can now also appreciate the specificity of Natali’s subject, as this body of work presents an insightful exploration of Detroit when it was on the cusp of losing half of its inhabitants, along with its status as America’s industrial capital. We witness Detroit just before the auto industry began its decade-long decline, as race riots and the Vietnam War raged on. Here Natali captures the everyday activity of 60s-era storefronts, art openings, sporting events, the celebrated high school prom, secretaries enjoying an afternoon cigarette, computer main-frame operators and machinists, waitresses and beauticians, family portraits, and much more-these images capture the now-vanished spirit of this largely abandoned city during a critical, spirited moment in its history. This new edition includes an introduction by Mark Binelli, author of Detroit City Is the Place to Be and a contributing editor at Rolling Stone.
ISBN: 0983587043
Publisher: Foggy Notion Books
Hardcover : 152 pages
Language: English
Dimensions: 0 x 0 x 0 inches