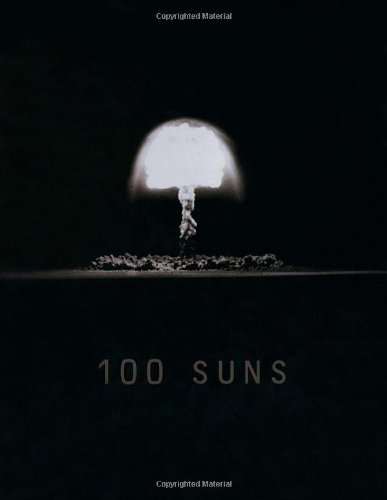 100 Suns
by Michael Light
Publisher's Description
The 100 photographs reproduced in this collection are from a relatively brief era-July 1945 to November 1962. During that time, the United States conducted 216 underwater and above-ground test explosions of nuclear devices, while the former Soviet Union orchestrated another 217 tests before the two superpowers signed the Limited Test Ban Treaty in 1963 forcing further nuclear testing underground. The impact of the events these photographs dramatically record has indisputably determined much of the course of the twentieth century, and, in many ways, will continue to shape dialogue surrounding the governance of nations, social responsibility, and environmental issues. In a New York Times Magazine article entitled "The Thinkable", dated May 4, 2003 and illustrated with images from 100 SUNS, author Bill Keller argues that the global community has now entered a second nuclear age, one no longer controlled by two categorically opposed yet highly sophisticated superpowers, but rather one characterized by a fragile set of international relationships where lines of communication are often muddled and fundamentalism more and more rampant. Far from condoning or glorifying the bomb, 100 SUNS seeks to educate and promote vital conversation around the weighty and far-reaching subject of nuclear weapons. Ironically, photographer Light, the creator of this project, was born on August 5th, 1963, the day the Limited Test Ban Treaty was signed in Moscow. This is his second book of photographs made from a large public repository. The first was FULL MOON (Cat# RH059H, $50), a magnificent book drawn from NASA's archives and presented as a visual journey to the moon. Both books are essentially meditations on the landscape, something Light pointed out early-on in a conversation we had about 100 SUNS. Furthermore, they share three common photographic elements: "they are all in the public domain, they had nothing to do with fine art originally, and they record a giant, landmark event for world civilization." He explained further. “The photographs in 100 SUNS are clearly landscapes and the book is broken into two sections, 'Desert' for the Nevada Test Site, and 'Ocean' for offshore tests. My personal photographic production focuses on the landscape, particularly the American West and the Great Basin area. My aerial photographs mark a progression from geological to urban time. In all my work, whether personal or archive-based, I have always been interested in the sublime and exactly that point at which human beings are dwarfed by their surroundings or events. With FULL MOON and 100 SUNS, I wanted to take on huge cultural icons. A single human's personal output can never compare with events like Apollo or the bomb. The goal is to present a new perspective on the subject and hopefully engender a necessary dialogue.
ISBN: 1400041139
Publisher: Knopf
Hardcover : 208 pages
Language: English
Dimensions: 10.5 x 13.7 x 1 inches