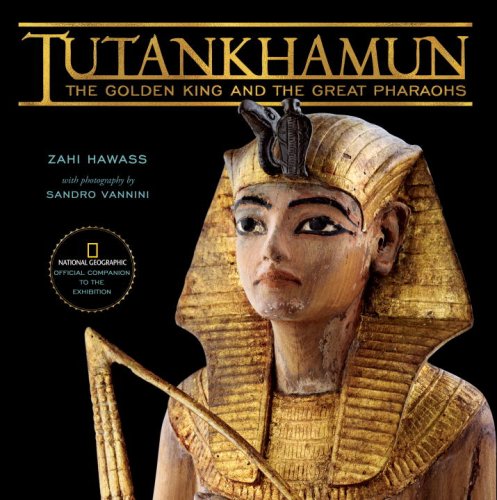 Tutankhamun: The Golden King and the Great Pharaohs
by Sandro Vannini
Publisher's Description
Mysterious boy king Tutankhamun returns to the U.S. in 2008, bringing rare treasures never before seen outside Egypt. For the millions of fans wanting a keepsake and chronicle of this magnificent new exhibition, this book will delight. Created by world-renowned art historians under the guidance of Zahi Hawass—director of Egypt’s Supreme Council of Antiquities and a well-known media personality—it surveys 3,000 years of ancient Egyptian history by focusing on the lives and lifestyles of great pharaohs. Master photographer Sandro Vannini spotlights every dazzling artifact, using an innovative technique that makes the image jump off the page. The book’s design echoes the exhibition, grouping objects representing family life, religious practices, funerary rituals, and gold. In each artifact—a queen’s eye makeup container, a likeness of a princess eating duck, a sarcophagus made for a prince’s cat—we glimpse the life of ancient Egyptian royalty: exotic and fascinating, yet so human. Gold gleams in a leopard-mask of gilded wood, a brilliant pendant bearing tiny goddesses, even the golden finger and toe covers of Tutankhamun himself, meant to protect his extremities in the afterlife. Featuring more than 120 treasures, a dozen evocative landscape and archaeology photos, and illuminating text, this book makes palpable the excitement, riches, and mysteries of ancient Egypt. It will be prominently displayed in all exhibition venues, and its contents will interest visitors to the show as well as Tut enthusiasts across the country.

Zahi Hawass, one of the foremost Egyptian archaeologists, is known throughout the world for his contributions to the understanding and preservation of Egypt’s heritage. Among his most important discoveries are the Tombs of the Pyramid Builders at Giza and the Valley of the Golden Mummies in the Bahariya Oasis. Recently he led the team that identified the lost mummy of Queen Hatshepsut and, in 2005, he conducted a CT scan of Tut’s mummy. In 2006, he was chosen by Time magazine as one of the world’s 100 Most Influential People.
ISBN: 1426202644
Publisher: National Geographic
Hardcover : 264 pages
Language: English
Dimensions: 10.6 x 10.6 x 1 inches