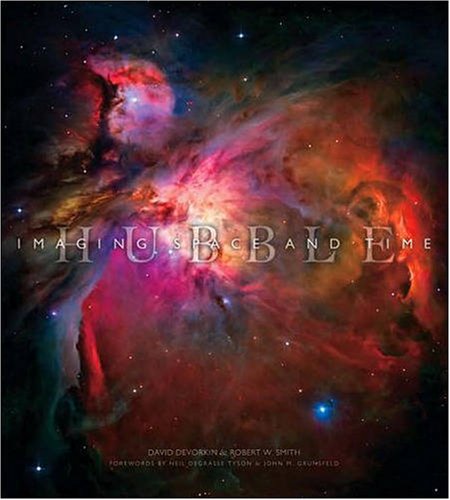 Hubble: Imaging Space and Time
by David Devorkin
Publisher's Description
In the spirit of National Geographic’s top-selling Orbit, this large-format, full-color volume stands alone in revealing more than 200 of the most spectacular images from the Hubble Space Telescope during its lifetime, to the very eve of the 2008 final shuttle mission to the telescope. Written by two of the world’s foremost authorities on space history, Hubble: Imaging Space and Time illuminates the solar system’s workings, the expansion of the universe, the birth and death of stars, the formation of planetary nebulae, the dynamics of galaxies, and the mysterious force known as 'dark energy.'

The potential impact of this book cannot be overstressed: The 2008 servicing mission to install new high-powered scientific instruments is especially high profile because the cancellation of the previous mission, in 2004, caused widespread controversy. The authors reveal the inside story of Hubble’s beginnings, its controversial early days, the drama of its first servicing missions, and the creation of the dynamic images that reach into the deepest regions of visible space, close to the time when the universe began.

A wealth of astonishing images leads us to the very edge of known space, setting the stage for the new James Webb Space Telescope, scheduled to launch in 2013. Find the stunning panoramic of Carina Nebula, detailing star birth as never before; a jet from a black hole in one galaxy striking a neighboring galaxy; a jewel-like collection of galaxies from the early years of the universe; and a giant galaxy cannibalizing a smaller galaxy.

Timed for the 2008 shuttle launch and coinciding with the 400th anniversary of Galileo’s first telescope, Hubble: Imaging Space and Time accompanies a high-profile exhibit at the National Air and Space Museum and will be featured on the popular NASM website.
ISBN: 1426203225
Publisher: National Geographic
Hardcover : 224 pages
Language: English
Dimensions: 3 x 9 x 9 inches