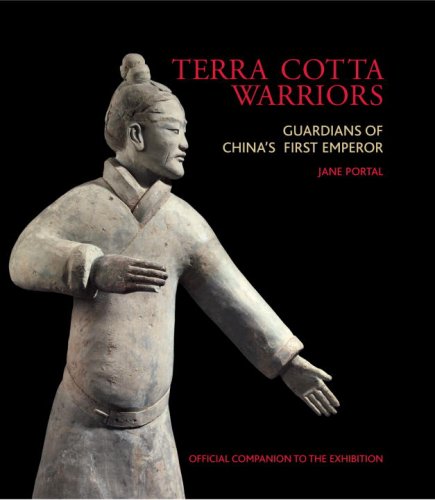 Terra Cotta Warriors: Guardians of China's First Emperor
by Jane Portal
Publisher's Description
Often described as the eighth Wonder of the World, the massive, underground army made from fired clay evokes both awe and curiosity. Who was this powerful Emperor of the Qin Dynasty who needed these warriors to guard him in the afterlife? How were nearly 8,000 figures made on such a vast scale so long ago?

This lovely little book, based on the latest research, brings the terra cotta warriors to life in 52 astonishing images. Like the millions of visitors to the on-site museum who see the figures in person, readers will marvel at the cavalry, archers, and infantry; lowly foot soldiers and high-ranking officers; figures of varying ages, with different hairstyles and unique facial expressions, seemingly representing many ethnic groups in China.

The soldiers are spread across a number of pits at the tomb site, on the outskirts of present-day Xi’an, where new discoveries are made every year. Archaeologists predict that it may take longer to excavate the First Emperor’s tomb complex than the approximately thirty-six years it took to build it, as new techniques of conservation and scientific research are introduced. Though the tomb was known from Chinese written record for thousands of years, there was no record of the terra cotta army. The surprise of this discovery still endures, and mounts with each page turned.
ISBN: 1426203802
Publisher: National Geographic
Hardcover : 96 pages
Language: English
Dimensions: 0.5 x 7.6 x 6.4 inches