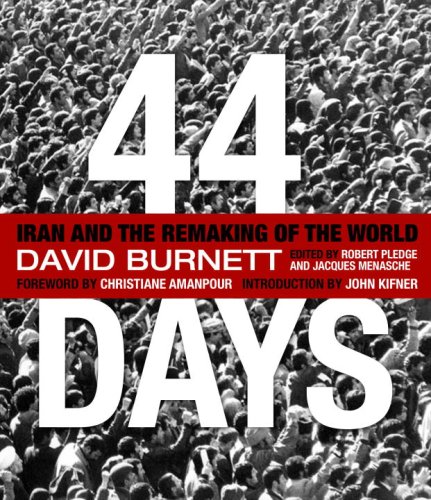 44 Days: Iran and the Remaking of the World
by Christiane Amanpour
Publisher's Description
At a time when most Westerners fled the carnage in Iran, David Burnett was one of the few to stay and document the breathtakingly sudden fall of Shah Mohammad Reza Pahlavi in December 1978, and the chaotic political maneuvering that would culminate in the triumph of the Ayatollahs and the birth of the Islamic Republic.

44 Days re-creates a coup that led to our long hostage crisis, President Jimmy Carter's political demise, and an enmity still blazing after thirty years. Burnett's vivid images of the dizzying events and emotions of that turbulent time illustrate his narrative of the monarchy's destruction, the last-ditch efforts to salvage a secular government, and the establishment of a hard-line regime dominated by religious leaders and the rule of Islamic law. Accompanying Burnett's account is a penetrating foreword by commentator Christiane Amanpour, herself Iranian-born, as well as an essay by celebrated New York Times reporter John Kifner, who shares his own experience of revolution in Iran and reflects upon its decades-long aftermath.

Filled with powerful insights into the revolution and its pertinence today, this book is for history and current affairs buffs, photography lovers, and everyone interested in the clash of Islamic fundamentalism and the West.
ISBN: 1426205139
Publisher: National Geographic
Hardcover : 224 pages
Language: English
Dimensions: 9.1 x 10.8 x 0.9 inches