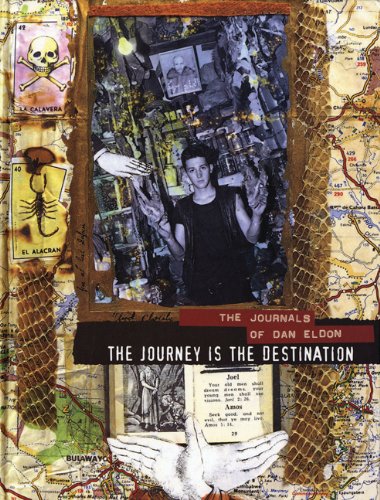 The Journey is the Destination: The Journals of Dan Eldon
by Kathy Eldon
Publisher's Description
In an age of artists inspired by Peter Beard's Diaries and books like Bill Burke's Mine Fields, Dan Eldon created these exploring his coming of age in the international aid community. Eldon had travelled throughout Africa running a relief mission, done graphic design in New York, founded a charity for Mozambiquan refugees, directed a film, written a book, and photographed for Reuters in Somalia. It was this final assignment that got him killed. He leaves behind these journals as as testament to the inner vision of a caring and brave young man, a fine artist and photographer.
Amazon.com Review
Dan Eldon, who was only 22 when he was chased down and killed by an angry mob in Somalia, was one of the youngest photographic stringers in Africa. But his journalistic work, which had appeared in Time and Newsweek, showed only a small part of his talent. Eldon excelled as an artist in his collages, which combined his photographs of Africa with paint, pastiche, pop culture images, advertising, and official documents. The Journey Is the Destination collects pages from the 17 scrapbooks that held his art. Chronicling his work from age 14 through his death at 22, this volume is startling not only in the intensity and thoughtfulness of the pages, but also in the fact that someone so young could have this kind of artistic depth and insight.
ISBN: 1452102503
Publisher: Chronicle Books
Paperback : 224 pages
Language: English
Dimensions: 8.1 x 10.6 x 0.8 inches