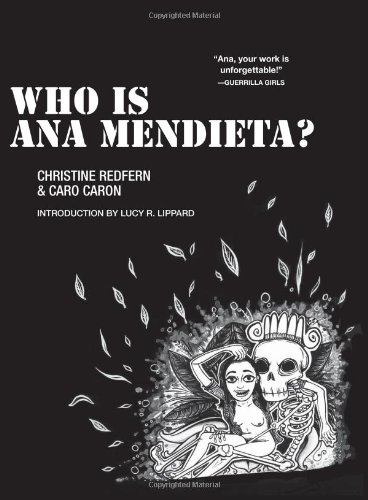 Who is Ana Mendieta? (Blindspot Graphics)
by Caro Caron
Publisher's Description
'Ana's death is one of millions that, despite four decades of feminist struggle, remain underestimated—social crimes that have yet to be fully confronted. . . . The very directness of the graphic novella is an ideal vehicle for the outrage women feel about the extent of domestic and general violence against us. May there be many more visual outcries like this one, to avenge the loss of women like Ana Mendieta.'—Lucy Lippard, from the introduction

Who Is Ana Mendieta? is a cultural biography of a Cuban American feminist artist working on the cusp of rebellion and regression. Jackson Pollack careens into a tree, killing his lover and himself; Frida Kahlo begins to be received as a significant painter, not only the muse of Diego Rivera; William Burroughs plays William Tell with an apple on his wife's head; Carolee Schneemann pulls a feminist screed out of her vagina and reads it aloud at a performance; Valerie Solanas shoots Andy Warhol. Ana Mendieta, whose bold work about the female body and violence was changing the course of art history, 'went out the window' of the New York City apartment she shared with her husband, sculptor Carl Andre, at the height of her career. Andre was tried and acquitted of her murder, and the legacy of Mendieta has been shrouded ever since.
ISBN: 1558617035
Publisher: The Feminist Press at CUNY
Hardcover : 84 pages
Language: English
Dimensions: 7.2 x 9 x 0.4 inches