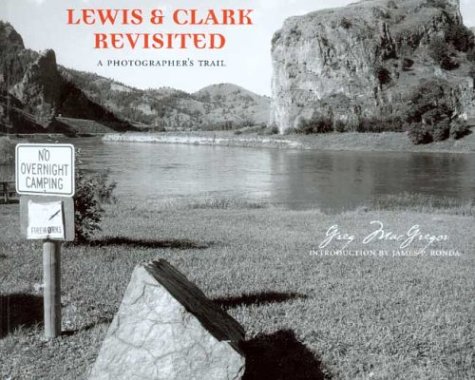 Lewis and Clark Revisited: A Photographer's Trail (Lyndhurst Book)
by Iris Tillman Hill
Publisher's Description
'Lewis and Clark Revisited takes us on a stunning visual journey through contemporary America. Almost ten years ago photographer Greg MacGregor began his journey, camera in hand, following the rivers west, and like Lewis and Clarke began his journey, camera in hand, following the rivers west, and like Lewis and Clark he found a country 'transformed by generations of human habitation.' In photographs that range from remarkable and beautiful views to powerful and unsettling images of decay, from the gently humorous to the deeply elegiac, MacGregor's eye never strays from its search for ways to see and understand the American landscape and the people who shaped it. Like others drawn to the story of the expedition. MacGregor found inspiration in the writings of Lewis and Clark. Their journals provided him with another lens through which to look, the lens of history, and he used their words as his guidebook to follow the human imprint on the old route. The book includes many delightful and revealing extracts from the journals. These historical texts take us back to the time of Lewis and Clark while they illuminate the world represented in MacGregor's contemporary photographs. The interplay of words and images reveals the multiple faces of the landscape and reminds us of the origins of this great story two hundred years ago. 'Lewis and Clark Revisited offers rare insight into the American experience, asking us to examine, as James Ronda aptly puts it, 'who we were then, who we are now, and who we might become.' An exhibition of photographs from 'Lewis and Clark Revisited is traveling to more than fifteen cities throughout the United States as part of the nationwide commemoration of the Lewis and Clark Bicentennial. Venues include the Washington State Historical Society, Sioux City Art Center, Jefferson National Expansion Memorial, and Philadelphia Museum of Art, among others.
ISBN: 0295983426
Publisher: University of Washington Press
Hardcover : 224 pages
Language: English