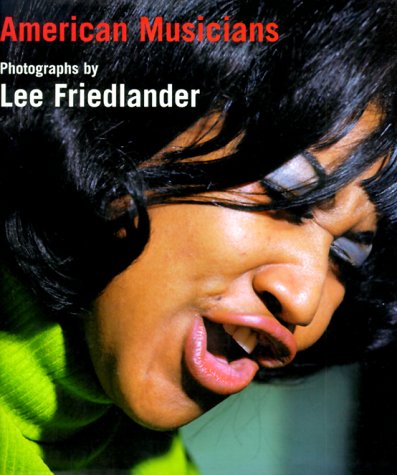 American Musicians
by Lee Friedlander
Publisher's Description
As the house photographer for Atlantic Records in the 1950s, Lee Friedlander's images define the artists of American Jazz's most groundbreaking period, as well as the birth of R&B and modern country as well. In color and black-and-white, Friedlander's portraits graced countless album covers and liner notes. These images have a well developed dramatic style--markedly different from his brilliantly alienated self-portraits and chaotic street scenes--portraying artists as diverse as Miles Davis and Johnny Cash, Thelonious Monk and Carl Perkins, John Coltrane and Nat King Cole.
Amazon.com Review
Of all the great modern photographers, MacArthur "genius grant" winner Lee Friedlander is probably the hippest to music. Inspired by a Charlie Parker record at 16, he left Aberdeen, Washington, and launched his career alongside ambitious friends like Diane Arbus. Arbus had a cold eye, but as this book of photos he took for Atlantic Records from the 1950s to the '70s proves, Friedlander's eye was warmly empathetic, at one with his subjects' emotions. (He has compared himself to the guy in the Joe Turner song who's "like a one-eyed cat peekin' at a seafood store.")

A first-rate visual extravaganza, American Musicians captures the country's virtuosos in some of their most candid moments: Aretha Franklin getting respect in 1968, Mahalia Jackson wailing on her knees, Ella in her heyday, on the road with Count Basie, Miles Davis actually looking the viewer right in the eye the year of Bitches Brew. Friedlander was a great discoverer--he found the discarded 1917 photos of New Orleans' Bellocq (immortalized in the film Pretty Baby), and one of his own early nude models was the unknown Madonna Ciccone. He helps people bare their souls to the camera, and the souls in this book are of historic importance. American Musicians also includes Friedlander's interviews with Ruth Brown and Steve Lacy.