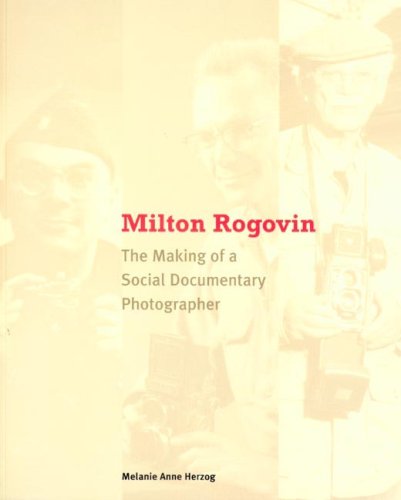 Milton Rogovin: The Making of a Social Documentary Photographer
by Douglas R. Nickel
Publisher's Description
Published in collaboration with the Center for Creative Photography, Tucson, Arizona.

'Milton Rogovin celebrates the non-celebrated, the ones who make the world go round.' These words, spoken by prize-winning author Studs Terkel, are a fitting lens through which to view the work of Milton Rogovin, optometrist, political activist, and photographer. Milton Rogovin: The Making of a Social Documentary Photographer chronicles the story behind that life, and the man behind the acclaimed photographs that invite us to see for the first time, or to see anew, the tenacity, profound dignity, and resilience of people living in extremely difficult circumstances.

Born in New York in 1909 to a Russian Jewish immigrant family, Rogovin was radicalized by the widespread deprivations he witnessed and experienced during the Depression, and he dedicated himself to working for social and economic justice. After military service in World War II, he began an optometry practice in Buffalo, and he and his wife became active politically, engaging in union organizing and voter registration in Buffalo's African-American community. His activism led him to be called before the House Committee on Un-American Activities, and after refusing to testify, he was dubbed 'Buffalo's Number One Communist.' Much of his optometry clientele vanished, but, as he would realize, 'there was also a positive result' to the attacks. His political voice silenced, he turned to photography as a way to speak about social inequities.

In the years that have followed, Rogovin has devoted himself to chronicling the lives of people in New York, Appalachia, Scotland, Cuba, Zimbabwe, Mexico, France, Czechoslovakia, Spain, Germany, and China. Scholar Melanie Herzog locates Rogovin within a tradition of social documentary photography that began when nineteenth- and early-twentieth-century sociologists took up the camera, or, more often, enlisted the service of photographers to advocate for social reform through visual representations of the plight of the poor. But while Rogovin's work is undoubtedly political, he does not romanticize his subjects or seek to portray them as victims or heroes; he seeks simply to convey the effects of material reality on people and their agency, to show how people live in relation to social conditions.

This richly illustrated retrospective features Rogovin's own narrative of his development and life as a documentary photographer, amplified by an account of the historical events and circumstances that shaped his politics and social consciousness. Milton Rogovin has dedicated his life's work-as an optometrist, an activist, and a photographer-to enabling people to see more clearly. His photographs demand witness, and to witness is to see.
ISBN: 0295986344
Publisher: University of Washington Press
Paperback : 176 pages
Language: English
Dimensions: 8.5 x 10.1 x 0.6 inches