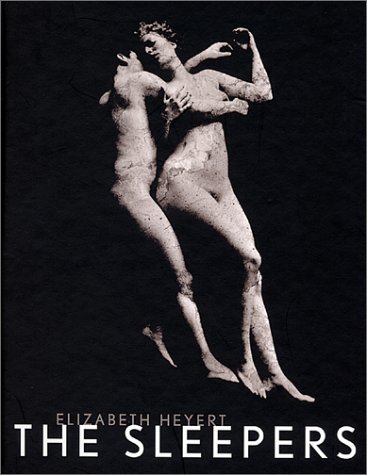 Elizabeth Heyert: The Sleepers
by Elizabeth Heyert
Publisher's Description
Do we reveal our hidden, inner self when we sleep? In The Sleepers, Elizabeth Heyert’s camera bears witness to moments rarely seen, when our public façade has vanished, and we are completely unaware of scrutiny. Working with a large format view camera from a balcony, Heyert documented modern men and women, in all their diversity, sleeping naked, singly and in couples. Against a stark black background, seemingly isolated in space, none of her subjects look like they are sleeping. Instead, freed and transformed by sleep, they appear to be dancing or flying, or in a state of ecstasy or torment. Then, in a startling second step, Heyert traveled to deserted parts of northern Sicily, and working in the dark of night, projected images of the sleeping figures onto ancient, damaged stone, and re-photographed them. With this surprising layering of imagery, what began as a voyeuristic exploration transcends documentation and captures an abstract, timeless essence of humanity. Iconic images emerge from darkness, mythic and heroic, with their deeper meanings dancing on the edge of ambiguous vision.
ISBN: 1564661059
Publisher: Sei Swann
Hardcover : 64 pages
Language: English