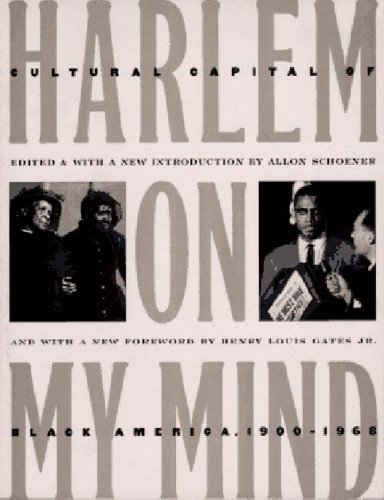 Harlem on My Mind: Cultural Capital of Black America, 1900-1968
by Allon Schoener
Publisher's Description
Originally published in 1968, Harlem on My Mind is one of the most comprehensive histories of Harlem, covering the period 1900-1968. In a striking and detailed compilation of period newspaper articles, Schoener tracks Harlem from its inception through its sweeping social changes, from Marcus Garvey to Malcolm X. A parallel study is made of the evolution of American music in the most influential location in the country. The book is profusely illustrated throughout with press and other photographs.
Amazon.com Review
Back in print after years of unavailability, this is the companion to a controversial documentary exhibit that appeared at New York's Metropolitan Museum of Art in 1969. Harlem on My Mind (the title comes from the novel by writer Claude McKay) includes hundreds of photographs (many by the celebrated James VanDerZee) of the famous, like Duke Ellington or Malcolm X, as well as of anonymous Harlemites in bars, restaurants, rooming houses and on the street. This edition includes a new foreword by Henry Louis Gates, Jr., as well as a new introduction by Allon Shoener explaining the genesis of the exhibit.
ISBN: 1565842669
Publisher: New Pr
Paperback : 258 pages
Language: English