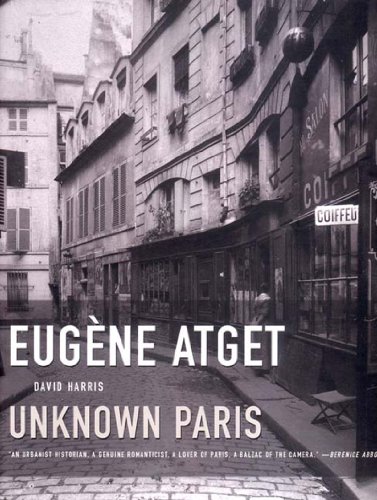 Eugene Atget: Unknown Paris
by David Harris
Publisher's Description
'Atget reached the pole of utmost mastery; but with the bitter modesty of a great craftsman who always lives in the shadows, he neglected to plant his flag there. Therefore many are able to flatter themselves that they have discovered the pole, even though Atget was there before them.' —Walter Benjamin For 30 years, Eugène Atget photographed the historic core of Paris, its buildings and monuments, its ancient streets and civic spaces, its public parks and gardens. With the exception of his earliest photographs, he chose not to represent a particular site by a single, definitive photograph but produced sequences of interrelated images that create a cumulative portrait. A collection of case studies of archetypal urban settings, this book examines Atget's approach to photography. It features 240 of his photographs—nearly all of which have never been published—assembled to display the integral relationship between the photographer’s working method and his subject matter, revealing the character of le Vieux Paris itself. A natural companion to the New Press’s Berenice Abbott: Changing New York, Eugène Atget is the product of an exhibit mounted in response to Abbott’s work and reflective of the two photographers’ shared vision. David Harris, for ten years the associate curator of photography at the Canadian Centre for Architecture, teaches at Ryerson University in Toronto.
ISBN: 1565848543
Publisher: New Press, The
Paperback : 208 pages
Language: English
Dimensions: 7.9 x 10.8 x 0 inches