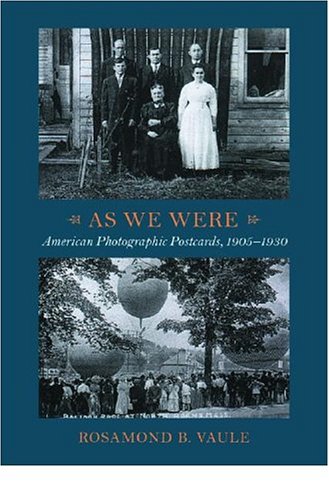 As We Were: American Photographic Postcards, 1905-1930
by Richard Benson
Publisher's Description
Today, no one seriously doubts the value, both aesthetic and historic, of the ubiquitous American photographic postcard. This was the medium that really brought photography to the masses; these cards were affordable, they were topical, and they could be sent for a penny anywhere in the country. The variety of imagery, much of it developed anonymously in small studios, much of it taken by inspired amateurs (these were the days when anyone could, and many folks did, own a camera) displays America in all its variety and vitality. Most postcards were mass produced and printed in ink by the collotype or halftone process. But a few were original photographic prints, exposed directly from glass plates or film negatives. Known as 'real photos' these were real photographs, aristocrats of the genre and spectacular examples of vernacular photography. In this charming and scholarly book, Vaule selects the best of them, from all over the country, addressing their social and historical contexts, explaining the mysteries of their manufacture and dissemination, and describing the characteristics and identities of their makers, many of whose names and studios are listed in the book. But without doubt, it is the images themselves that still hold us: storefronts and townships, frisky children and sober adults, air ships and barn raisings. Over one hundred are reproduced here, each in fine-line duotone, each as fascinating and compelling today as when first fixed on paper.
ISBN: 1567922503
Publisher: David R Godine
Hardcover : 215 pages
Language: English
Dimensions: 7.2 x 10 x 1.1 inches