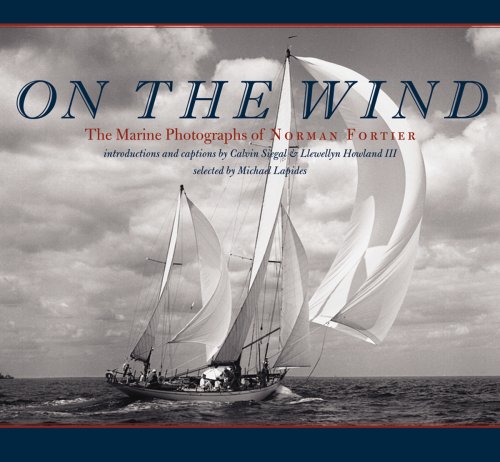 On the Wind: The Marine Photographs of Norman Fortier (Imago Mundi Book)
by Michael Lapides
Publisher's Description
Since 1947 the marine photographer Norman Fortier has embraced the south coast of Massachusetts and Rhode Island as his studio and his inspiration. His cameras have captured images of every conceivable description on the waters from Block Island to outer Cape Cod and the offshore islands: yachts and small craft under sail and at anchor; draggers and trawlers bound to and from Georges Bank; runabouts and sportfishermen dockside and at speed; commercial vessels and tall ships. Always, his images capture the beauty and ever-changing moods of the region's coastline, harbors, and islands.

Over the years his photographs have appeared in America's best boating magazines. In 1967 he published his first collection of yachting images, The Bay and the Sound, which rapidly went through four printings. More recently, the New Bedford Whaling Museum celebrated Fortier's six decades as a professional photographer with a major retrospective exhibition of his work displaying his deep roots in New Bedford, his intense love of Buzzards Bay, the Elizabeth Islands, and surrounding waters, and his uncanny ability to depict the complex interrelationship of humans, boats, and the sea.

Beginning with early images of Padanaram Harbor, On the Wind carries the viewer west to Rhode Island Sound and Newport, east to Mattapoisett, Marion, and harbors at the head of Buzzards Bay. Succeeding chapters cover Martha's Vineyard and the offshore islands, the port of New Bedford and working craft, the grand spectacle that is the New York Yacht Club's annual summer cruise, and boats designed and built in South Dartmouth by the legendary Concordia Company.

Printed entirely in duotone, this is a book about sailing and sailors, harbors and fishermen, selected from more than 100,000 negatives. It is also a moving and unforgettable evocation of a time and way of life that have already passed into memory.
ISBN: 1567923348
Publisher: David R Godine
Hardcover : 160 pages
Language: English
Dimensions: 8.9 x 9.8 x 0.8 inches