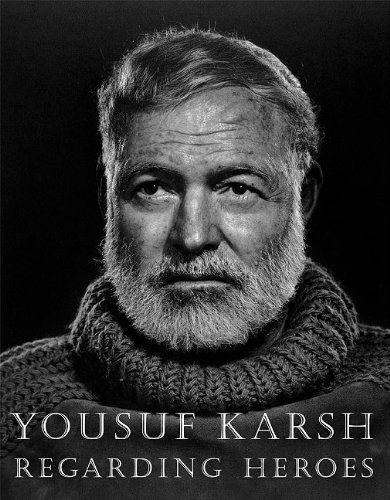 Regarding Heroes
by David Travis
Publisher's Description
Yousuf Karsh's life-long ambition was to search for a form within a face, one that could become a symbol for a life that was purposeful, meaningful, and generally virtuous. 'I speak with some experience when I say that I have rarely left the company of accomplished men and women without feeling that they had in them real sincerity, integrity – yes, and sometimes vanity of course – and always a sense of high purpose.' In his sixty-year career, he seldom wavered from this goal, even when fame and fortune came his way. Neither did he discard his trademark variations in lighting style that he perfected in the late 1940s while other fashions came and went. Unchanging, too, was his genius at capturing the revealing and ephemeral psychological expressions, those fleeting disclosures of character and purpose for which his famous sitters trusted him.

He was the preferred photographer of kings, queens, princes, presidents, prime ministers, generals, and other political figures because he rendered them with an unbiased and unfailing regard for their dignity. With musicians, artists, writers, scientists, actors, and other creative intellectuals, he shared a parallel ambition: to create works of art of lasting value. In making what now seem singular, monumental statements honoring those he considered his contemporary heroes, he stood alone in his field, so much so that it could be argued he was the last of his kind.

Karsh Arrived in Canada as a teenage refugee, escaping the genocide in Turkish Armenia, and was trained by his uncle, and later by John Garo in Boston, as a professional portrait photographer. At first this meant pleasing his sitters, rather than the editors and publishers who, with their staff photographers, kept an eye on fashion and celebrity. In 1941, after nine years as a struggling young photographer in Ottawa, fortune and personal connections justified his dedication. He shot the unforgetable image of Winston Churchill that became known as 'the roaring lion.' His name and his career were made almost instantly. But despite his personal success, this was still a period of anxious uncertainty, especially concerning the fate of European democracies and indeed the future of Western civilization. It was in that period that Karsh captured, like no other photographer, the faces of the people who defined and directed the age. It is this notion of heroism and its stylistic rendition that this book examines and illuminates.