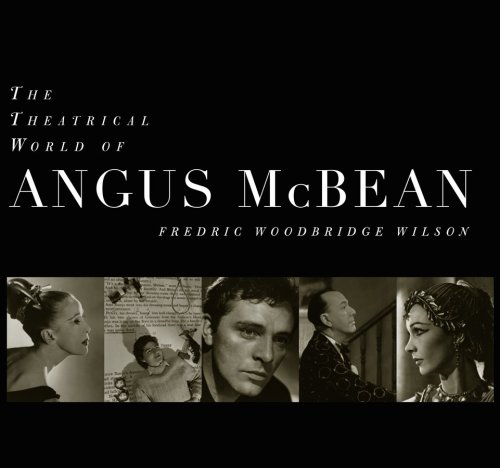 The Theatrical World of Angus McBean
by Fredric Woodbridge Wilson
Publisher's Description
The photography of Angus McBean encompasses more than three decades of the history of British theater. His work includes most of the memorable productions of the Old Vic Company and of what is now the Royal Shakespeare Company; opera productions at Glyndebourne and the Royal Opera House, Covent Garden; ballet and operetta at Sadler's Wells; and West End productions of plays and musicals both old and new – hundreds of productions in all. He was the favorite photographer of Vivien Leigh, Laurence Olivier, and Edith Evans, and he photographed countless plays starring John Gielgud, Ralph Richardson, and Alec Guinness, not to mention younger stars such as Audrey Hepburn, Richard Burton, and Elizabeth Taylor. In fact, McBean photographed virtually every great actor of his era, perhaps the most brilliant years in the annals of British theater.

His studio was active and eclectic; among his patrons were not only actors, singers, and dancers, but also playwrights, producers, composers, artists, and writers. In his early career, McBean had been a pioneer of surrealist photography, with a highly popular series of 'surrealized' portraits that appeared in The Sketch, and, later, of montage and multiple-exposure photography in a long-running series for The Tatler.

In 1969, McBean approached Harvard University to initiate the sale of his collection, and in the following year his archive of glass plate negatives, index prints, and programs, together with the copyrights, became a part of the Harvard Theatre Collection, where it remains the most often-requested collection of visual material. The photographs in this book, selected and captioned by the archive's curator, Fredric Woodbridge Wilson, have been carefully reproduced from the original negatives.

For anyone interested in the history of twentieth-century theater or the figures who made the British stage so fascinating, this is a book that rolls back the curtain to reveal a cast of stars.