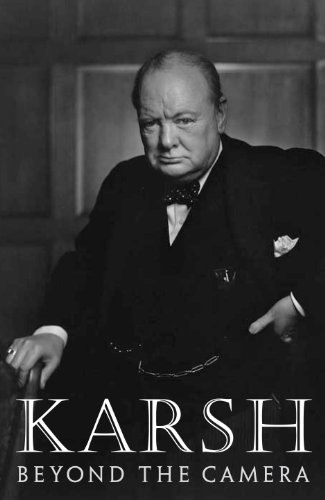 Karsh: Beyond the Camera
by David Travis
Publisher's Description
In August and September of 1988, Yousuf Karsh's long-time assistant, Jerry Fielder, sat down with the master photographer and taped over nine hours of recollections of the many portrait sessions he'd experienced in one of the greatest careers in history. Karsh spoke of his sitters and his rags-to-riches life, including much that had never before been revealed or recorded. Previously, Karsh had often paired his full-page portraits with stories of his encounters with famous sitters. However, as his œuvre grew, the photographs soon eclipsed the commentary, and his essays were often edited down to captions.

Drawing from the newly rediscovered 1988 recordings, Karsh: Beyond the Camera reestablishes the original presentation of Karsh's work, pairing each photograph with the story of its making on the facing page. Published in an affordable small format paperback with flaps, Karsh's portraits are elucidated and complemented both by his own recollections and by the text of veteran curator David Travis. The resulting book, with its chronological rather than thematic arrangement of portraits, is a study of Karsh's artistic and stylistic development, offering the reader an unparalleled tour through the greatest images of the photographer's life work.

As much as Karsh wrote about his portrait sessions, he rarely revealed what he thought about himself. Travis constructs the compelling history of how a brilliant technician behind the camera was able to go beyond the studio trappings to plumb the psychological realm all great portrait photographers must navigate and master. Although Karsh had a deep understanding of the human psyche, he worked on an emotional level rather than an analytical one. Thus, his stories seldom addressed what he thought about his artistic experiences. This essential element of Karsh's work is what David Travis locates and fills in, drawing not only from the anecdotes themselves, but from the one thing that has been missing from all publications prior to this – the photographer's voice.
ISBN: 1567924387
Publisher: David R Godine
Paperback : 168 pages
Language: English
Dimensions: 6.5 x 9.3 x 0.7 inches