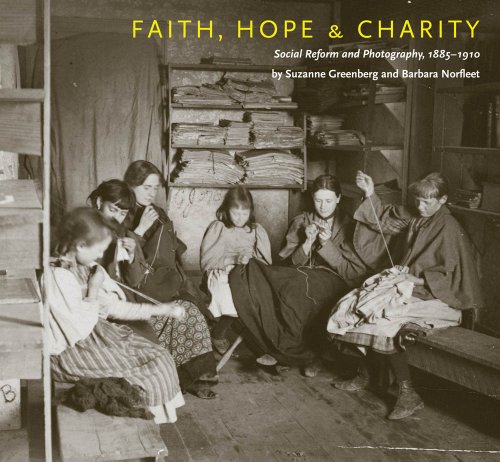 Faith, Hope & Charity: Social Reform and Photography, 1885-1910
by Suzanne Greenberg
Publisher's Description
During the last decades of the nineteenth century, our country's expanding wealth and influence moved progressive thinkers to evaluate the role of public institutions in providing for the welfare of a growing population. A burgeoning interest in issues as diverse as criminality among the poor, the health of immigrants, overcrowding in slums, and the education of the disabled spurred the development of new means to investigate, document, and analyze their living conditions with an eye toward improving their lives.

Among the figures who became preoccupied with issues of social welfare was Francis Greenwood Peabody, a Harvard educator who brought the reform agenda to students via the college's Department of Social Ethics. A chief tool in Peabody's didactic arsenal was the Social Ethics Collection, a wide-ranging assemblage of photographs, maps, and charts that documented living conditions, educational institutions, charitable organizations, and hospitals across the US and Europe.

Capitalizing on rapid improvements in cameras and film, photographers (many of them all but forgotten) provided Pea­body with his materials, taking what we would now call a documentary approach. While less overtly ideological than the work of journalists like Jacob Riis, the 7,000 images that Peabody amassed recorded not only slums, sickness, and sweatshops, but also the factories of forward-thinking companies like NCR and Heinz and the progressive educational institutions like the Tuskegee and Hampton institutes.

Long considered outdated, the Social Ethics Collection had been consigned to cabinets when Barbara Norfleet and Suzanne Greenberg took a renewed interest in the images as part of our larger historical record and as works of art. Faith, Hope & Charity explores the role of Peabody's collection in compelling people of wealth and influence - in the church, in business, in universities - to become interested and invested in the welfare of the less fortunate, restoring to view an unknown but vivid part of our ongoing national debate on issues of social welfare and social justice.
ISBN: 1567924484
Publisher: David R Godine
Hardcover : 160 pages
Language: English
Dimensions: 0 x 0 x 0 inches