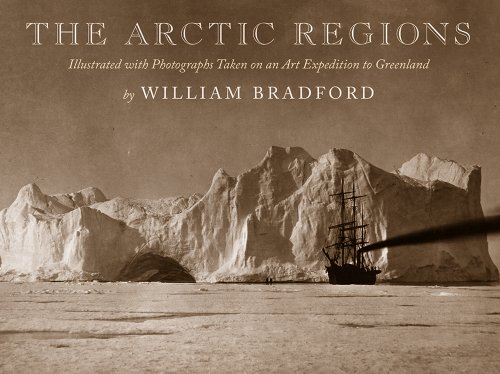 The Arctic Regions: Illustrated with Photographs Taken on an Art Expedition to Greenland
by William Bradford
Publisher's Description
A landmark in the annals of American photography and polar adventure, William Bradford's book The Arctic Regions was first published for subscribers in 1873. No more than three hundred copies of the leather-bound elephant folio are known to have been printed. The book has been a prized possession of major American and European museums, libraries, and collectors ever since.

With an introduction written by the noted polar historian Russell A. Potter, The Arctic Regions is now available for the first time to the trade. As the pace of global climate change quickens and the magnificent Arctic icecap dwindles, its publication could not be more timely or important.

'This volume,' artist William Bradford explained, 'is the result of an expedition to the Arctic regions, made solely for the purposes of art, in the summer of 1869.' Bradford had brought with him the eminent Arctic explorer and author Dr. Isaac Israel Hayes, and he had engaged the 450-ton steamer Panther to sail from St. John's, Newfoundland. On July 3rd they departed, carrying a 'party of adventurers whose story is partially illustrated by the photographic views contained in this volume.' Bradford became one of the first American painters to pursue the dream of painting the Arctic regions firsthand. He had made several previous voyages, but none this ambitious or far-reaching. His purpose was always to study nature under its 'terrible' aspects, to acquire material for later use in his artwork and after that in lectures illustrated with stereopticon views. On this voyage Bradford brought along two photographers from Boston, John L. Dunmore and George P. Critcherson. They were the first photographic professionals to document so northerly a voyage. Their images added the crucial aura of 'truth' to Bradford's work. While other artists had depicted the northern regions, none had made photography so central a part of the artistic process.

Today, the science-infused and art-driven narrative of The Arctic Regions offers a prophetic prelude to current news of the Earth's climate situation: these regions, first photographed under Bradford's direction, may yet vanish in our lifetime, never to be seen again.
ISBN: 1567924514
Publisher: David R Godine
Hardcover : 200 pages
Language: English
Dimensions: 0 x 0 x 0 inches