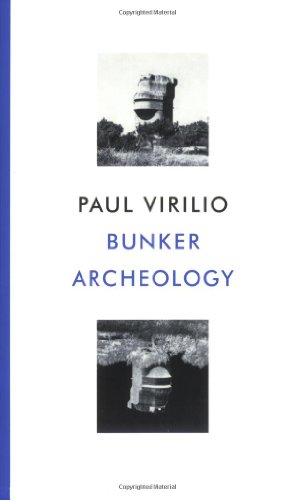 Bunker Archaeology
by Paul Virilio
Publisher's Description
In Bunker Archeology, urban philosopher and cultural theorist Paul Virilio turns his attention–and camera–to the ominous yet strangely compelling German bunkers from WW II that lie abandoned on the coast of France. These ghostly reminders of destruction and oppression prompt Virilio to consider the nature of war and existence, in relation to both the Second World War and contemporary times.

This is the first English-language translation of the French edition published in 1975 to accompany the exhibition of Paul Virilio's photographs at the Pompidou Center. The author's haunting photographs are accompanied by his analysis of the architecture of war in both philosophical and concrete terms. Virilio discusses fortresses and military space in general and the bunkers themselves, including facsimiles of original military maps and extracts from Hitler's 'Directives of War.' He also examines the role of Albert Speer, Hitler's architect, in the rise of the Third Reich.
ISBN: 1568980159
Publisher: Princeton Archit.Press
Paperback : 216 pages
Language: English
Dimensions: 0.6 x 10.5 x 6.5 inches